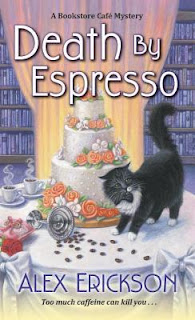 Goodreads synopsis:
Bookstore-caf owner Krissy Hancock has plenty to keep her occupied outside business hours, like preparing for her best friend's wedding and solving a murder . . .

Krissy is meeting Vicki's parents at the Pine Hills, Ohio, airport--it's the least she can do as maid of honor, even if her relationship with Mr. and Mrs. Patterson is a bit strained. Besides, her own dad is coming in on the same flight. But there are a few additional arrivals, too. Her father's brought a date--and the Pattersons, both actors, seem to have an entire entourage trailing behind them.

Uninvited guests are a headache--especially when one turns out to be, allegedly at least, the most important wedding planner in all the world. Though Vicki and Krissy have already made arrangements for a small, simple party, Vicki's snobby drama queen mother has her own ideas. Cathy the wedding planner is raring to go, possibly energized by the chocolate-covered espresso beans she compulsively munches. But while the caffeine keeps her awake, it doesn't keep her alive--and after Cathy chokes on an espresso bean after being hit in the head, Krissy has to find out who ended her supposedly stellar career

This is the sixth book in the Bookstore Cafe Mystery series, or as I like to call it, the Death By Coffee series.

This book starts out with Krissy Hancock meeting her dad, James Hancock, famous mystery author and his new girlfriend, Laura at the airport. They and Vicki’s parents are coming in for Vicki’s wedding to Mason Lawyer. Vicki is Krissy’s co-owner of Death by Coffee, their cafe slash bookstore. But the two couples aren’t all that show up. The Patterson’s bring a few more couples in tow with them even though their daughter requested it be a “small” wedding with only close friends and family. Vicki’s mom Gina has decided that her gift to her daughter would be the services of a famous wedding planner. It didn’t matter to her that the wedding was already planned and perfect the way Vicki wanted it. Mothers wanted what mothers wanted. When the wedding planner ends up dead and Krissy pegged as the prime suspect, things start to get interesting.

This was the first book where I really felt concerned for Krissy’s safety. She knew better and should have called the cops herself upon finding the body and not let Vicki’s parents make the police believe she was a criminal. I mean, who would really kill a wedding planner because she was forcing unwanted services on them? Seems a little far fetched. I loved the Clue reference here: Krissy in the kitchen with the candlestick. Classic.

Krissy ended up in jail quite a bit in this one. And Paul, although concerned, didn’t let her off the hook immediately. Good for him. Finally wearing his big cop panties. Sometimes Krissy gets away with more than she should in Pine Hills. There are laws you aren’t supposed to break, ya know. I feared Chief Dalton might put her in the pokie for good. After her search of Lyric’s hotel room, I was afraid it was all done for and Krissy and she might stay in jail. That girl needs to take her own safety into consideration sometimes.

Then there was Will and his sudden departure from her life. How rude was that? He kept pulling himself away from her so he wouldn’t have to face her before leaving for Colorado. What a pansy! I never understood why Krissy and Paul never tried for a relationship after their first official “date”. They seem to fit each other much better than she and Will ever did. I have a hope for a relationship in a future book.

And what’s up with Misfit and his affection for her father’s girlfriend? How weird is that? She must have that calming effect on everyone around her. Good to see James with a gal he deserves. And Rita was a hoot nearly losing it after realizing that James was off the romantic market. I hope I don’t have to read scenes like Misery someday when James and Laura actually get married. Rita may completely lose her head.

This book is like coming home. I feel giddy reading each book and I may have to do a re-read of the entire series now that I have read them all. I am excited for the future of the series. Book seven in the series DEATH BY CAFE MOCHA is coming out August 27, 2019. Check it out too.

Highly recommended.
Posted by Toni at 7:20 AM