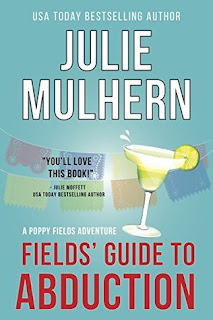 Goodreads synopsis:
Poppy Fields is a Hollywood IT girl with big problems. Bodies are popping up like daisies, the Mexican police have taken her passport, and, when she runs for the border, a cartel makes her their unwilling guest.

Surrounded by trained killers, Poppy will need charm, intelligence, and a killer Chihuahua if she hopes to escape.

This is the first book in a new series by Julie Mulhern. I am a big fan of Mulhern’s writing and her characters Detective Anarchy Jones and Ellison Russell from the Country Club Murders series are two of my all time favorite characters. So, I knew I would probably like this series then I read it. Now I am hooked. Mulhern has this unique ability to make us fall in love with her quirky book people.

What a surprise this was!

This was a great read. Poppy would give Ellison Russell a run for her money in the finding dead bodies department. This is an excellent beginning to a series. All the right bells and whistles. Tons of action and suspense and an almost reality television vibe. Just excellent all around. UNPUTDOWNABLE! 💛

Here is a brief synopsis of Field’s Guide to Abductions: Poppy Fields is the daughter of mega movie star Chariss Carlton. So she has the supposed life of the elite. But her life isn’t that exciting. When she wakes up in the bed of her on again, off again boyfriend Jake and finds him dead, a whole new world of drama comes down on Poppy’s head. While she is morning Jake, she is asked by one of her besties to do a photo op down at a resort in Mexico. How can she say no to such easy money. Unfortunately, she draws the eye of a drug cartel second in command named Javier. Then a Mexican telenovel star comes to her villa for aid and ends up dead. Now the crazy just starts rolling downhill with a vengeance. People she thought were on the up and up might actually be aligned with the bad guys. She doesn’t know who to trust except her mom’s constant best friend James, also a mega movie star in his own right who lends assistance at a moments notice.

Like I said, excellent, excellent. I had to pick up the next book in the series because it was like a thirsty gal searching for the water she didn’t know she needed. I am hoping that James shows up in book two and is already somehow linked to this mysterious government agency headed by Mr. Brown. Why do I keep seeing Phil Coulson from SHIELD as the director? He’s an unassuming guy with a lot more backbone than you realize, methinks.

One spectacular series start!
Posted by Toni at 8:07 AM