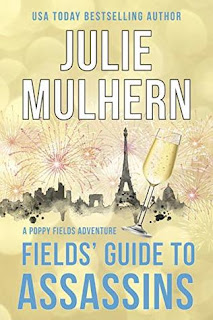 Goodreads synopsis:
Poppy Fields, Hollywood IT girl extraordinaire, accompanies her A-list mother to Paris, and why not? It’s PARIS!

What her mother doesn’t know is Poppy’s on assignment. Her mission? To help bankrupt a drug cartel. To do that, she must access encrypted account numbers, evade a drug lord with a grudge, dodge a Russian oligarch, and align herself with a man who looks like a Norse god. Oh, and there’s that plot—the one to launch a massive attack on the City of Lights.

Poppy Fields is working for an unnamed agency run by Mr. Brown. She is off on her first assignment, in of all places, Paris! Luckily her movie star mother is filming a movie in Paris and Poppy is staying with her at the Ritz.

With a Mexican drug Lord after her, Poppy realizes that the first two attempts to kill her were probably delivered  by hitmen paid off by Javier Diaz. Of course, her mother who feels like her own privacy has been invaded by these threats forces Poppy to get a bodyguard. Mr. Brown enlists Mark Stone a lookalike for the movie version of Thor to come to Poppy’s aid.

The addition of Stone to the cast was brilliant. I was unimpressed by the ex-boyfriend Jake who does make an appearance here and there but it is the brilliant Mr. Stone who makes this book sing. I was praying he wasn’t going to be one of the first victims. Usually, when I really like somebody, they get killed off. Luckily, that wasn’t the case here.

There were a lot of twists and turns here and even a mysterious helper who came to Poppy’s aid. And she has no idea who he is. I am so hoping that fact is revealed in the next book in the series.

Poppy is smarter than she gives herself credit for.  She is not just a pretty face and she wants to prove herself to Mr. Brown that she is capable. I think she may have to brush up on her Krrav Maga skills to get ready for her next assignment.

I like this girl. She has spunk. And spunk is what makes this book top notch.