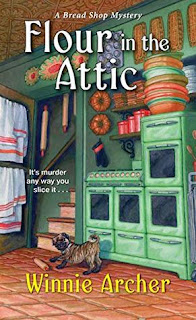 Goodreads synopsis:
Ivy Culpepper keeps the ovens hot at Yeast of Eden, a Northern California bakery that specializes in traditional breads. But now she has to deal with a stone-cold killer . . .

Just as Ivy's brother Billy is about to get engaged to his beloved, a tragedy interrupts the happy moment. The body of longtime Santa Sofia resident Marisol Ruiz washes up on the beach--and it's even more heartbreaking since Marisol's father also recently died. But Marisol was a strong competitive swimmer. It seems unlikely there's even a grain of truth to the theory that she accidentally drowned.

As Ivy gets to work helping her mentor, Olaya Solis, with the catering for Marisol's funeral, she also teams up with her partners in detection--because if they want to prevent someone from getting away with murder, there's no time for loafing . . .

This is the fourth book in the A Bread Shop Mystery series by Winnie Archer. I am still curious as to why they titled this book the way they did. I know flour goes with the whole bread making aspect of the book but I didn’t think that totally resonated with the story within the pages of this book. I can see where concrete dust which is sort of like flour and the same basic color could by the why to it all, but I guess I just don’t get it.

This story is kind of depressing. I know murder generally is depressing but this entire story is centered around a funeral home. It is not a place I long to visit or stay for very long. I struggled through the beginning of the novel even though the murder happened pretty early on. Once the setting changed to the funeral home and they were gathering for the visitation, the story just flew. I couldn’t read it fast enough. I wish they would have shortened the first half of the book and expanded the back half. That second half made the entire book worth the read. I really enjoyed Ivy and Miguel working together. That was exciting stuff.

I didn’t understand why the ex-husband of Ivy showed up in the middle of the story. It felt like a big red herring making us wonder about him yet not having him really involved in anything. When I got to the end, I realized the author’s intent. His influence and his own ex-wife was going to figure prominently in the next Winnie Archer Bread Shop book.

If you get started on this book and find it a bit on the slow side, don’t give up on it! Keep reading. This book has a slow start, yes, but it builds up to great action and the characters really grow on you, even the crazy ones.

This book was a treat and my first foray into the world of Yeast of Eden. I will definitely be coming back to this Northern California town for a visit. Check it out.