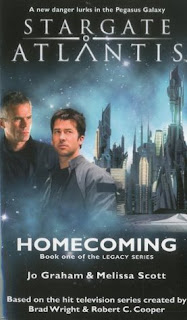 Goodreads synopsis:
The first of a six book series set after the end of Stargate Atlantis's final season, Homecoming sees Atlantis return to the Pegasus Galaxy. But the situation in Pegasus has changed. The Wraith are on the verge of unification under the new and powerful Queen Death. She stages a daring raid with one goal: the capture of the only man able to give their ships hyperdrive and lead them to Earth — Dr. Rodney McKay.

This is the sixteenth book in the Stargate Atlantis series; and the first book in a six book series that takes place after the end of the final season of the tv series. An epic battle was fought with the Wraith and now Atlantis is safely home on earth parked not far outside of San Francisco in the ocean.

Things on Earth are at a standstill concerning Atlantis. The IOA and the government don’t want Atlantis to go back to the Pegasus galaxy. They want to retain all her equipment and weaponry if such a threat were to ever come to Earth again. Then the staff starts to break up. Rodney McKay resigns to take a position at Area 51 as does his girlfriend Jennifer. Both Teyla and Ronan reluctantly decide to accompany the new star vessel called the George Hammond. And John Sheppard is undecided. He can’t go on the Hammond because he and Col. Sam Carter are of such similar rank. He fears his only hope is to completely resign from the military. But the only place that has ever felt like home has been when he was on Atlantis.

That is about as far as I want to go with the description because you know a whole heck of a lot more happens in the meantime. Everyone is crazy angry at General O’Neill which I find humorous and the fact that he is the master of red tape even more funny. That is so not Jack.

There are encounters with the people Teyla came from as well as the Genii and of course, the Wraith where a new much younger Queen is in town. She embraces the old ways and calls herself Death. Catchy, right? She’s got them all running in circles.

I kind of miss Elizabeth Weir because she would be down for all the crap they put Richard Woolsey through trying to get Atlantis back to the Pegasus galaxy. The little twist that happens right in there is pretty cool and would have most SGC fans cheering.

While Teyla struggles with continuing her relationship with Torren’s father, her heart still longs for another. While no names are mentioned, my money is on Col. John Sheppard because… he would be my choice too.

The book ends on a pretty good cliffhanger which will lead us into the next book of this six book series called THE LOST.


I enjoyed getting to know the Atlantis cast again. They are some of my favorite characters of all time. I think there are 24 total books in the Stargate Atlantis series and I look forward to diving anew into this spectacular world.
Posted by Toni at 11:15 AM