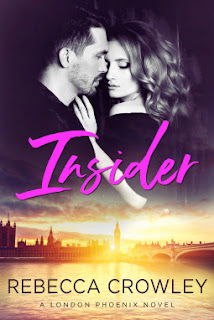 Goodreads synopsis:
ER doctor Grace Reilly thrives on patching up her patients, propping them back on their feet and sending them home healthier, yet emotionally she feels flat on her back after being deceived by her ex-boyfriend. She’s shelved her malfunctioning romantic radar, possibly forever. But she’s not opposed to no strings attached sex, especially when she meets the brooding and enigmatic Oren Brody. Even better? After giving her a mind-blowing orgasm with no reciprocal expectations, he vanishes as mysteriously as he appeared.

Six months ago Oren Brody and his brothers, Asher and Ebon, bought the London Phoenix newspaper to save the esteemed daily from bankruptcy. They need a big scoop or a budget shortfall could shut them down. A confidential tip about corruption and potential medical malfeasance points Oren toward St. Hilda’s Hospital – the same hospital where his mother unexpectedly died after a visit to the ER for a pounding headache. He needs answers, and Grace seems to be the key. He’d tracked her down hoping she could be a source. Seducing her was accidental, but he finds himself unable to ignore their zinging chemistry and he doesn’t really want to.

Oren needs to earn Grace’s trust, but that’s a big ask since their first meeting began with a lie and ended with sexual fireworks. Grace has already been deceived by one lover, can she forgive and forget and give Oren a chance?

This is the first book in a new series called London Phoenix by Rebecca Crowley.

I completely resonated with this book because I also work at a newspaper like Oren Brody does except I am a graphic artist and he is an owner. Slight difference. But I do understand the dynamic. It is hard for a broadsheet paper to survive these days and finding those blockbuster stories that will trigger sales is few and far between.

This story is about Oren and his brothers who have bought a newspaper in London named the London Phoenix. They are already on the story of corruption inside of St. Hilda’s Hospital where Grace Reilly is an ER doctor. She meets Oren after a presentation where she was a speaker. He picked her brain about things, plugging her with questions. She mistakenly thought he was an IT guy and Oren didn’t correct her. Their instant attraction took Oren away from his goal and the two steeled away to a nearby office to have a little nookie. This is where he snagged a directory of all doctors and immediately disappeared.

During the search for the story, Oren and Grace have an on again, off again relationship that is hard on both of them. But eventually they begin to understand where the other is coming from after a long talk with friends and family to clear up the situation. I am interested in reading book two in the London Phoenix series which I assume will feature Ada, Grace’s former roommate and Oren’s brother Asher.

Definitely a guilty pleasure worth digging into!