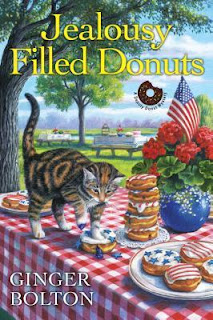 Goodreads synopsis:
When a firecracker becomes a murder weapon, Emily Westhill pursues a killer with a short fuse ...

It is a truth universally acknowledged--cops and donuts go together. Exhibit A: Deputy Donut Café, owned and operated by detective's widow Emily Westhill and her father-in-law, the retired police chief of Fallingbrook, Wisconsin. Named after Emily's adored and adorable tabby, the donut shop is a favorite among cops, firemen, and EMTs, as well as tourists and townspeople. So when Fallingbrook needs donuts for their Fourth of July picnic, Emily's shop gets deputized.

But a twisted killer has found another use for Emily's treats. At the picnic, a firecracker is hidden in a stack of raspberry-filled donuts and aimed at the unwitting queen of the festivities. When it explodes, she is killed. Having her jelly donuts involved puts Emily in a sticky situation, and when a shady shutterbug tries to frame her with incriminating photos, she finds herself in quite a jam. To preserve her freedom and her shop's reputation, Emily needs to solve this case--before the fuse-lighting felon goes off again ...

This is the third book in the Deputy Donut Mystery series by Ginger Bolton.

This is my first perusal into the Deputy Donut universe and I have to say that I really liked it!

We sort of had a dual storyline going on in this one. One plot was the entire mystery behind who killed the Queen of the fourth of July festivities by putting a dangerous firecracker in a 6-stack of Deputy Donuts. The other was the will they/won’t they between Emily Westhill and her late husband’s partner, Brent Fyne.

Emily used to be a 911 operator but after the death of her husband and her perceived part in it, she gave up that career and opened Deputy Donuts with her father-in-law Tom who had previously been the Fallingbrook chief of police, now retired. Because of her perceived part in her husband’s death, she fears moving forward, especially with anyone in the police department. She hasn’t even been able to visit her husband’s old office or drive on the road where the accident occurred. This gives the mystery a complex and fearful aspect. It is the feeling of waiting for the other shoe to drop. This angst was pulled out longer than I thought necessary but sometimes I want conflict resolved  early and that inner need doesn’t always jive with a plot like this.

The community in this book was great. I like getting to see and know people you most likely will see in other books. Another blogger I follow, Dru’s Book Musings, sent out an email featuring this book and a Day in Life of Misty Ossler who is one of Emily’s good friends and a cop on the police force. Misty wasn’t featured a ton in this book and I applaud when a blogger can pull so much detail about a character and write it up on the page.

Reading this book and reveling in the complete ending of the two dual storylines gave me a happy feeling in my heart and made me want to delve into the previous two books in this series. I need a two book marathon and I need it right now!

Definitely check this book out if you love a great cozy mystery. You won’t be disappointed.

I received this as an ARC (Advanced Reader Copy) in return for an honest review. I thank NetGalley, the publisher and the author for allowing me to read this title.
Posted by Toni at 8:08 AM