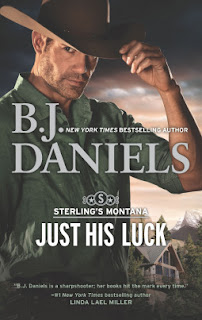 Goodreads synopsis:
He thought the past was finally behind him

Shade Sterling has carried a torch for Lizzy Conners since senior year of high school. But the timing never felt right for them, especially since his ex-girlfriend, Ariel, disappeared without a trace years ago. Now, with their ten-year class reunion approaching, Shade is tired of waiting. Determined to move on with his life and take a chance with Lizzy, he’s all in…until a car is dredged up from a local pond and Ariel’s remains are found inside.

As the newly appointed sheriff, Lizzy must investigate every single lead—including the ones that point right to Shade. She knows she can’t let her heart get in the way of an investigation, but she can’t accept that Shade is guilty. Now if she can only prove it—both to the town out for justice and to herself.

This is the third book in the Sterling’s Montana series by B.J.Daniels.

Daniels is an author I am very familiar with considering my obsession with all things Harlequin Intrigue and Silhouette Romantic Suspense. My library at home is jam-packed with a metric ton of these titles alone. So, when I requested this title, I knew I wouldn’t be disappointed and I was right in my assumption.

I find it humorous that Slade Sterling is on the cover of this book. I wouldn’t exactly consider him the main character. He is indeed among one of the most important secondary characters, yes. Lead, to me, goes to Sheriff Lizzy Connors. It would have been nice to have her and Slade on the cover together. But who doesn’t like a handsome cowboy on the cover of their novel, right?

I didn’t realize this until I was almost at the end, but this book had a taste of Agatha Christie’s And Then There Were None. Similar, but different. In the Christie book nearly everyone dies, even the killer at one point. (Of course, that person wasn’t really dead and came back to life to off all the guests.) Not everyone gets killed in Daniel’s book, but they make a significant dent in the population of this Montana town.

I have to admit that I had no clue whodunit. Everyone seemed to hate Ariel and had a similar motivation to kill her. I am surprised she wasn’t done in much earlier in her life considering how she treated everyone. And her mother seemed almost clueless to the witch she had become. We all know someone who can smile their sweetest smile while twisting the knife in your back. That was Ariel. Not a nice gal. And she was blackmailing everyone. I am not sure why exactly. She had it all. She was rich, popular and could get any guy she wanted.

In a normal investigation by the Sheriff’s office, Lizzie would not have been able to investigate considering she was the previous best friend of the victim and stole away the victim’s boyfriend on the night of her death. They tried to justify it by saying their office was small and they didn’t have the manpower or money to outsource this investigation. But still, I am baffled. She should have been at least assigned another person to assist her who wasn’t involved. Lizzy’s sounding board was Slade, who had an equal motivation to kill Ariel considering she broke up with him on the night of her death and loudly proclaimed he was the father of her baby. Neither fact was true but that girl had the gift of manipulation.

Once you dive into this novel, you will not want to put it down. So set aside an entire day and soak it all up. You won’t be disappointed. Great book. The romance wasn’t as prevalent as the mystery but that is okay with me when the mystery is so good.

I received this as an ARC (Advanced Reader Copy) in return for an honest review. I thank NetGalley, the publisher and the author for allowing me to read this title.
Posted by Toni at 7:13 AM