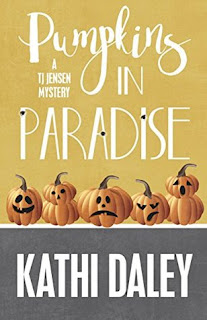 Goodreads synopsis:
Between volunteering for the annual pumpkin festival and coaching her girls to the state soccer finals, high school teacher Tj Jensen finds her good friend Zachary Collins dead in his favorite chair. When the handsome new deputy closes the case without so much as a “why” or “how,” Tj turns her attention from chili cook-offs and pumpkin carving to complex puzzles, prophetic riddles, and a decades-old secret she seems destined to unravel.

This is the first book in the Tj Jensen Paradise Lake mystery series.

The first half of this book was not my favorite. I was screaming in my head to show not tell us what is going on. There were a lot of places where characters said what happened instead of seeing the action unfold. They were relating the past of Deputy Dylan Caine at one point and I found myself wishing for a flashback instead of what was presented to us.

I wish the characterization had been a bit more developed as well. I understand that this is the first book in a series and you can only do so much but I was left wanting more.

The second half of the book was much better. It just flew. As soon as Tj and Deputy Dylan began talking more, things started to happen. I was sort of confused as to who the love interest might be since it seemed to waffle between a few options. My money is on Dylan Caine. Always good to have a cop in your pocket when you need one, especially one who actually likes you.

This book was full of possibilities and I liked the world and how the mystery unfolded. I almost wish there was a book before this one relating all the history of Zachary Collins. That seemed to be the character with the richest backstory and he was already dead when the book opened.

Not my favorite but I have hope for better in future books.