Risk the Burn (The Smokejumpers #3) by Marnee Blake 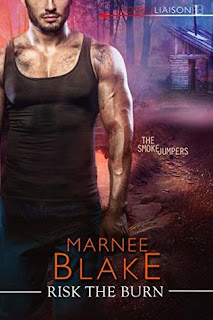 Risk the Burn
(The Smokejumpers #3)
by Marnee Blake

Goodreads synopsis:
The fire within . . .
A parachute jump gone horribly wrong nearly put an end to Hunter Buchanan’s smokejumper career. But with his body on the mend, the rugged firefighter is ready to get back to Oregon’s Redmond Air Center and his training. Except, while he’s conquered his physical injuries, he hasn’t been able to do the same for his panic attacks. Enter Charlotte Jones, aka Charlie, the trainer who tames his tension like nobody’s business. It doesn’t hurt that she’s easy on the eyes. Or that she stirs a hunger in him to deal with just about anything in order to be the man she needs . . .

After four years of hiding from a violent man in her past, Charlie is ready to face the world again. She knows this has more than a little to do with the potent mix of strength and vulnerability she’s found in Hunter’s arms. But when a dangerous encounter convinces her the worst isn’t behind her, she’ll have to decide if she’s strong enough to accept Hunter’s help—and his love . . .

This is the third book in the Smokejumpers series by Marnee Blake.

Basic Premise: Hunter Buchanan was injured in a parachute jump that was sabotaged. He spent a year on the mend working in physical therapy where Charlie was a PT. He is working hard on his therapy in order to get back into Smokejumper training. Funny thing is now that he has attained his goal he isn’t sure he wants it any more. Then someone begins to target Charlie not long after she and Hunter get together romantically. Now they are rushing against time to discover who is out to do in Charlie before she gets spooked and leaves Hunter behind.

This is one of those books where you are going to have wait for it. And wait for it. And still wait for it before the two love interests get together. I swear I wanted to Gibbs-slap Charlie Jones on the back of the head a number of times during this book. Where Charlie was a ‘friady-cat jumping at her own shadow, Hunter was patient and kind. I found it hard to believe that someone in the healing profession would push someone away on purpose who was having a sort of PTSD experience. That is not what they called it in this book but I think the anxiety attacks Hunter experienced was exactly that. I was waiting for Charlie’s actions to put Hunter in full out panic mode.

It was hard to get a handle on what exactly Charlie was so afraid of during this book. She had changed her name before coming to Bend. I thought it was odd she told the policeman in the beginning of this face. You’d think if you went to all the trouble of changing your name you might want to keep it a secret, especially if you think someone might come after you in the future.

This book was good but frustrating to read. I spent most of my time angry at Charlie for pushing away this amazing man she had managed to snag. I wish she would have treated him with as much care as he gave to her.

If you love a good romantic suspense book, definitely check this one out.

I received this as an ARC (Advanced Reader Copy) in return for an honest review. I thank NetGalley, the publisher and the author for allowing me to read this title.
Posted by Toni at 12:09 PM