Still Not Into You (Enguard Security #2) by Nicole Snow 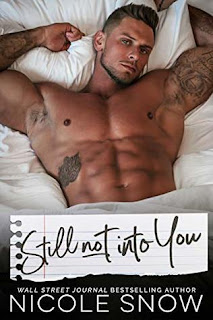 Goodreads synopsis:
No way. No how. Never.
And if he calls me darlin' one more time...

He pushes buttons I didn't even know I had.
Gabe freaking Barin.
Fire to my ice. Walking mountain. Growly, alpha, and achingly kind.
Last man on earth I want in my life.

But I've got three heaping problems:
1. My baby niece is missing.
2. Some psycho just slashed up my car.
3. My boss made Gabe my personal protector.

I'll even ignore the night hate gets complicated.
Then our battle moves between the sheets.
Gabe gives me a hundred new toe-curling reasons to curse his name.
But there's one nagging thing I can't fight.
What if Gabe freaking Barin is more than a gorgeous bad habit?
What if he's the hero I never knew I'd need?

This is the second book in the Enguard Security series by Nicole Snow.

Skylar likes to do things on her own but her boss Landon knows she is wearing herself out and might put herself in danger in the process of looking for her niece Joannie, who is missing. So, Landon hires Gabe, a guy he knows from New Orleans. This man looks like a linebacker to Skylar’s pixie fairy body. Think David meeting Goliath. Quite a size difference. But Skylar makes up for her lack of height by being the gruffest MF around. She doesn’t have time for relationships but Gabe and his annoying southern charm is starting to wear her down.

I liked the dynamic here. But Skylar was a bit too gruff for me and I think most men would have given up on her after she pushed them away again and again. I didn’t appreciate how she treated Gabe when all he was really there for was a job. In the beginning it was just a job but they scraped away the layers of resistance between them and the outside world and began to see each other as possible mates.

For someone who was as smart as Skylar I am surprised it took her so long to suspect who the real kidnapper was. Even with my few reservations, it was a wonderful ride.

No one does sexy romantic suspense like Nicole Snow.

Highly recommended.
Posted by Toni at 9:58 AM