Still Not Over You (Enguard Security #1) by Nicole Snow 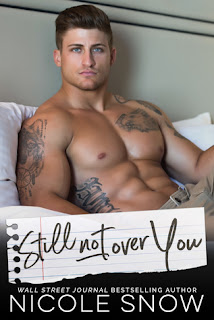 Goodreads synopsis:
I'm SO over that gorgeous, scary, heartbreaking man who hates my guts.
I'm just counting on him to save my life.

Never, ever fall for your brother's hot older friend.
I flunked the test the instant I laid eyes on Landon Strauss.
Tall. Ripped. Commanding. Irresistibly alpha.
He gave a damn like no one else did.
His soul-searing eyes saw me, not just a nerd girl next door.
I had my idol, my destiny, and names for our future kids picked.

Then I read Landon's little black book.
One nosy peek exposed the shock of a lifetime.
His confession. His pain. His plan.
The sweet boy I loved was gone.
Hero-turned-villain-turned-bad-memory overnight.

Five years later, an insane slip of fate puts us under the same roof.
Sweet closure, I think.
I almost forget he hates me.
I almost think we'll talk like normal adults.
I don't expect the shirtless behemoth who comes barreling through my door.
Landon's grown up. All snarls, testosterone, and lethal chemistry.
We're in trouble, he says.
Oh, Landon. Oh, baby, don't I know it?

McKenna needs a new start and her brother Steve gives her an out. She will watch over the house of one of their long-time friends, Landon Strauss. Things start to get out of control right from the beginning when someone sets fire to Landon’s beach front guest house. He is injured trying to break down the door thinking Kenna is inside and this is before the two of them “discover” each other in a romantic sense. Landon is working a job for a popular pop singer and Kenna fibs to the singer saying she is Landon’s girlfriend. But there is more than the singer standing in the way of this relationship. Landon’s own past has come back to haunt him putting a security agency he no longer trusts in charge of part of the pop singer’s security.

I thought this book was really good. I started this series on book three since that cover attracted me the most. Sometimes I think the covers of these books detract from the story. But once you get to reading, it is the story that keeps you invested.

Be aware that the POV jumps back and forth from chapter to chapter but it is clearly marked in the title of each.

This is a definite guilty pleasure book. I am in awe of how long Snow can keep a sexy scene going when if I had been writing it, I would have been out of steam and words pages earlier. The characterization is out of this world and you really start caring for the people walking around in Snow’s Enguard universe.

This is a great four book series. And I wish there were more books to enjoy.

Highly recommended.
Posted by Toni at 9:20 AM