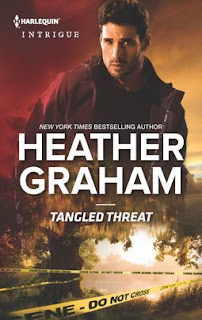 Goodreads synopsis:
A body hanging from the infamous History Tree unraveled their teenage love. Now Maura Antrim is again tangled up with Brock McGovern. Twelve years later, they’re back where that murder occurred—where Brock had been arrested and then released, where Maura had run, too scared to stand by his side. But with two women missing, and Brock now an FBI agent, Maura is determined to help. Together, they’ll have to confront a threat that never died and see if their passion has withstood the test of time.

This book is a lot shorter than some of Heather Graham’s other works, but it is just as good. It is published under the Harlequin Intrigue line of books.

Maura Antrim and Brock McGovern work at a historical place where a lot of death has occurred around an ancient tree that intertwined with a palm tree. They call it the History Tree, although it is whispered it is the Terror Tree. People have been found dead around it or went missing after visiting it. During a tour where Maura and Brock lead a bunch of people around the sites, they discover the dead body of one of their co-workers. Brock is immediately taken into custody after an anonymous tip and Maura’s parents whisk her away from the scene immediately changing all her social media accounts and her email and phone number. The two didn’t have contact after that day.

The book starts with Brock, now an FBI agent, being asked to look into some disappearances of women down by the History Tree. He is cautious. Too many memories lie back in that place. That is why he made his home in New York, about as far north in America you can get without getting out of the country. Maura has started a very profitable business where she makes short videos that go viral and help other businesses make theirs a success. They meet again at the History Tree. Tension ensues.

I thought this book was great. Pretty slow in the beginning but we were being introduced to the cast, so it is not a section to overlooked. I felt like I was missing a few red herrings leading me to other suspects considering whom ended up being the ultimate bad guys. I tried to look back and see if I missed some subtle clues but I didn’t pick up on even one to indicate this person wasn’t completely on the up and up. It was indeed quite a surprising twist.

I am not certain what the ultimate purpose was in kidnapping the women but it did become the catalyst that brought Brock and Maura back together. I felt like they reunited too soon but it was about at the 50 percent point in the book when they rediscovered their love and realized why they had never found another significant person in their lives.

It was just the guilty please read I needed containing both and love, mystery and thriller. Definitely pick this up if you love a good intrigue.