The Bakeshop at Pumpkin and Spice by Donna Kauffman, Kate Angell, & Allyson Charles 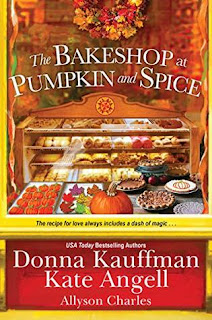 The Bakeshop at Pumpkin and Spice
by Donna Kauffman, Kate Angell, & Allyson Charles

Goodreads synopsis:
Every autumn, Moonbright, Maine, is the picture of charm with its piles of crisp leaves, flickering jack-o’-lanterns … and a touch of the sweetest kind of enchantment.

Witches, goblins, the occasional ghost—they’re all sure to be spotted at the annual Halloween parade, where adults and children alike dress in costume to celebrate Moonbright’s favorite holiday. And no place has more seasonal spirit than Bellaluna’s Bakeshop, a family business steeped in traditional recipes, welcoming warmth—and, legend has it, truly spellbinding, heart-melting treats …

Between good-natured Halloween tricks, frothy pumpkin lattes, and some very special baked goods, for three Moonbright residents looking for love—whether they know it or not—the spookiest thing will be how magical romance can suddenly be …

This story is just wow, EVERYTHING I ever wanted in a love story. It doesn’t even feel like a short story at all.  Bree O’Neill and her family own the Bakeshop at Pumpkin and Spice lanes called Bellaluna’s. This family has its own brand of magic… foodie magic. They make cookies and these cookie nudge couples together, couples that might never have met otherwise. Bella was working on her first batch of love spell iced cookies and was unhappy with the results. Then in walked Caleb Dimitriou to the bakeshop. He took one of Bella’s cookies and it was just… magic! Bella’s nonna Sofia knew it would be. They all had the gift. She knew it would come through Bella eventually.

Everything seems like it is perfect for them. Then they realize that each have similar family connections and a love of baking. She here and he in Philly. But Caleb is only in Moonbright due to his Aunt and Uncle’s after the fact honeymoon. He will only be in town for 6 weeks. Bree knows that she would never leave Moonbright and she could never ask Caleb to give up everything for her.

Fate has other ideas. Her magical connection to Caleb prompts her to visit him when she believes him to be in danger. The connection they have is just a mind-blowing thing to read. I could literally feel all the tingles and yes, magic happening with the couple. It comes through on the page in a flurry of fascinating circumstances. I just loved this one so much!!

Cassandra Hie has decided who she wants for her beau and she is setting up a strategy to get him. Her target is her boss Samuel. He is buttoned up and straight-laced. He is a guy who would provide her security in her life. But handyman Chip Gneiss eats the magical cookie Cassie had bought for Samuel not realizings her intentions for its use. I don’t even think Samuel knew Cassie even worked for him much less was pining away for him. But fate keeps pushing Chip and Cassie together, much to her dismay. She knows what she wants and has decided it is not Chip.

Then Chip comes and builds the Halloween Haunted House she had always dreamed of in her driveway. He initially gets frustrated at her constantly pushing him away and then comes to the conclusion that Cassie is someone he wants to fight for.

Super sweet story but I felt like this one almost ended too soon. I think I needed a bit more of the story after Cassie realized that she would surrender to fate and finally accept Chip. This is one of those stories you just want to knock the main character on the back of the head and tell her to “wake up.” Her best friend, Franka (cool name btw) did the best she could during the story but it is Chip’s persistence that wins him the day and Cassie’s heart.

Lara Shaw is not having a good day. First her boyfriend dumps her for the town’s sluttiest resident, her rent goes up higher than she can handle and her 30 hour a week job will be gone by Christmas. Sofia from Bellaluna’s Bakeshop gives her and Mayor Jack Hanson some of their special iced cookies. Lara had always felt like an outcast compared to Jack’s popularity. They knew each other in school, but what she never realized was that he was sweet on her… even back then. The cookies only nudge the two together.

While Lara is on her job hunt, she doesn’t find what she is looking for. Jack decides to hire her to coordinate the Halloween festivities, parade and the choose the Queen. There is a fire cracker of a woman, Edna Milner, in this story who gives all the residents she secretly likes special names like Pumpkin Head for Lara and Jack-o-lantern for Jack.

This is a story not only about finding love again even when you don’t think it is possible but a story about community and how being a good neighbor can be its own blessing.

Super sweet story. You won’t want to miss it.

Excerpt of LAVENDER & MISTLETOE from Donna Kauffman is tagged at the end of this book. It is definitely a book you might want to buy after getting this short glimpse into the story. It is part of a multiple book series. It might be a series to do a marathon read with too.

I put this book off until the end of the month and after reading my plethora of cozy mysteries that came out on August 27. I am not sure why I waited. This book might look unassuming but you can feel the magic inside its pages. Pick it up and check it out for yourself. You won’t be disappointed.

I received this as an ARC (Advanced Reader Copy) in return for an honest review. I thank NetGalley, the publisher and the author for allowing me to read this title.
Posted by Toni at 7:40 AM