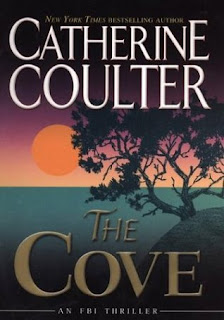 Goodreads synopsis:
The Cove is a quaint little postcard town made up only of old folk who sell the World's Greatest Ice Cream - a secret recipe that brings lots of tourists into town.

Into The Cove comes Sally Brainerd, daughter of murdered Amory St. John of Washington, D.C., seeking sanctuary, and FBI Special Agent James Quinlan who's undercover and after her. He's got a murder to solve, and he believes she's the key. But is she really?

This is the first book in the FBI Thriller series by Catherine Coulter.

I started this book in July and put it aside in order to read some ARCs I needed to dig into first. I finally got a chance to finish it and I am glad I picked it back up again. In the beginning I felt like this was a bit old-fashioned. It almost seemed like some of the energy from Coulter’s Regency books was rubbing off on this one. But once the action left the Cove and got into the real world, I felt like the story really took off.

I had a Stepford Wives wives vibe the entire time I was reading this. There was a twist in this that I totally didn’t see coming and I applaud Coulter for surprising me so fully. When the main mystery wrapped up at about 85 percent, I knew they would have to revisit the Cove and ferret out what had truly been going on with all the missing travelers and the town’s sudden influx of money to keep it all perfectly clean and green.

Starting with book two of this series, it continues with FBI Special Agent Dillon Savich who is merely a secondary character in this book. I wonder what made Coulter transition from James Quinlan as the main character of the series and focus instead on Savich. I wouldn’t mind seeing Quinlan have his own book now and then in this series but I believe it is strictly a Savich/Sherlock series from this point forward.

Don’t skip this book merely because it doesn’t feature Savich/Sherlock in it. It is a great read and it really gives you a look into who Savich is before he met Sherlock.

If you love a good mystery, definitely check this one out. Don’t give up on this book. It is well worth it in the end.
Posted by Toni at 8:29 AM