Beyond a Reasonable Stout (Sloan Krause #3) by Ellie Alexander 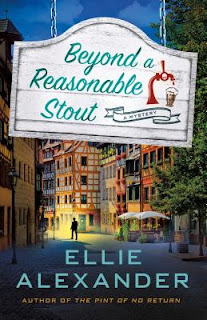 Beyond a Reasonable Stout
(Sloan Krause #3)
by Ellie Alexander

It's the dead season in Leavenworth, Washington. The throngs of Oktoberfest crowds have headed home, and the charming Bavarian streets are quiet and calm--momentarily. Villagers use the reprieve to drink in the crisp fall mountain air and prepare for the upcoming winter light festival. Soon the German-inspired shops and restaurants will be aglow with thousands of twinkling lights. Visitors will return to the northern Cascades to drink warm mulled cider and peruse the holiday markets. Brewer, Sloan Krause and her partner in crime Garrett Strong are using the slowdown to stock up on a new line of their signature craft beers at Nitro. They're experimenting with a hoppy holiday pine and a chocolate hazelnut stout. The small brewery is alive with delicious scents and bubbling batches of brew.

Sloan is in her element. She loves the creativity and lowkey atmosphere at Nitro. Only that is soon threatened by the incumbent city councilmember Kristopher Cooper. Kristopher is running for re-election on a platform of making Leavenworth dry. Everyone in beertopia is fuming. Leavenworth's economy relies on keeping the kegs flowing. Kristopher wants to banish beer, a policy that might just bankrupt the entire village. However, Kristopher turns up dead days before election night. Sloan quickly realizes that his murder isn't the work of a stranger. Friends, family, and every other business owner had a motive to kill him, including none other than April Ablin, Leavenworth's self-described ambassador of all things German. Sloan finds herself defending April and trying to sleuth out a killer amongst a group of familiar faces.

This is the third book in the Sloane Krause series by Ellie Alexander.

I read the first book in this series, DEATH ON TAP, back in March. I  bought the paperback from my local grocery store. I don’t drink so I wasn’t sure what to expect. My cousin had been dabbling in micro-brewing soI thought  I’d give it a try. And I am so glad I did.

This series just sucks you in. Sloane is still having Mac problems (Mac is her ex-hubby) in book three and I can’t quite figure where she stands romantically with any man, but that’s okay. All the sleuthing takes your mind off of it. The dead body of a man running for office ends up the centerpiece in a city council race. And apparently everybody and their  brother has a motive to do him in. The man is buying stakes in many local businesses and plans to make this beer haven a dry gulch. Even the ever German clad Heidi is accused of the crime. When I started reading this series she was not my favorite character. So, the fact that I felt a little bad for her when she  lost her mind and her German accent during this book is telling. She is growing on me….like a fungus, but it is indeed a nice fungus. I would have liked to see more of her in this book even though I think she is a little (okay a lot) crazy. Sometimes crazy keep them coming back to read a series.

I wish there had been more with Garrett and the possible connection between him and Sloan. Not to mention more Nitro. I feel like she needs a haven in the storm that is her life and right now I don’t see her security being too strong. Oh, she plays a good game of making it seem like all is okay, that is for sure.

As the mystery developed I was wracking my brain as to who could possibly have done it. I skipped book two so I wasn’t certain who the mainstay characters were in order to take them out of my equation. Once the culprit was named I was like… who is that? That name didn’t stick with me for some reason. And that whole bombshell with Mac’s parents at the end? Wow. What was that? Definitely cliffhanger  there.  I can’t wait the next installment of Sloane on Tap and see how  all the details that were left hanging washes out.

This is definitely a cozy mystery author to watch and put on your must read list. She never disappoints.

I received this as an ARC (Advanced Reader Copy) in return for an honest review. I thank NetGalley, the publisher and the author for allowing me to read this title.
Posted by Toni at 9:05 AM