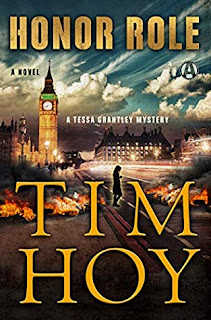 Goodreads synopsis:
A captivating thriller of clashing cultures, the code of honor, the power of mercy, and the tangled lies between friends and family, Honor Role follows the quest of a fearless detective determined to do what she believes is right—no matter the cost.

It should have been an open-and-shut case: suicide by cyanide. But when Detective Inspector Tessa Grantley pries open the hidden parts of Freddy Hayworth’s life, she uncovers his complicated battle with mental illness and the parade of spurned women left in Freddy’s wake. Quickly, a full-blown homicide investigation ensues, where nothing is as it seems.

Outside of her demanding police work, DI Grantley seems to have outrun the secrets of her past. She is raising her son in a loving home, in a quiet London neighborhood, embraced by a tight-knit, supportive community. And while she might occasionally have different ideas about child-rearing than her Pakistani-born nanny, Jabirah Rahman, Tessa and Jabirah develop a bond not easily broken . . . until Jabirah disappears. Then, Tessa must use her intuition and investigative skills on two fronts. What she finds puts her on a collision course with ideas of justice and righteousness that dangerously conflict with her own.

In this thriller from the author of Still Death, the boundaries between Detective Inspector Tessa Grantley’s career and her family fatally blur, causing her to question everything she believes in.

This is the second book in the Detective Inspector Tessa Grantley Mystery series by Tim Hoy.

We have two separate cases going on in this book. One is her job searching for the killer of Freddy Hayworth. Looks likes suicide by cyanide to start with but this case takes her on quite a ride, The further she  delves into Freddy’s life, the more the suspects pile up.

On top of that, she has her own case to solve as her nanny leaves to return to Pakistan but signs keep pointing to the fact that Jabirah might actually be dead. Her culture doesn’t appease her need to be with her boyfriend and not the man chosen for her by her family. There is a huge culture clash here as Tessa begins to fear the worst.

The Freddy case was okay and it was all police procedural, but the search for clues about the nanny are what makes this book sing. We fear along with Tessa as she gets closer and closer to the truth.

If you like detective fiction and police procedurals, this is definitely is definitely for you! Cool new series to add to my TBR list!

I received this as an ARC (Advanced Reader Copy) in return for an honest review. I thank NetGalley, the publisher and the author for allowing me to read this title.
Posted by Toni at 7:46 AM