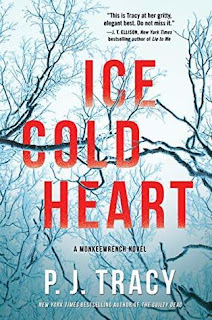 It's a bitter winter in Minnesota--too cold to kill. There hasn't been a murder for a month, but the lull quickly comes to an end for Detectives Leo Magozzi and Gino Rolseth, when they're called to the gruesome homicide of Kelly Ramage. Found in a friend's vacant house, this was no random attack, and clues reveal that she was living a very dangerous secret life.

Magozzi and Gino trace her steps back to an art gallery where she was last seen alive. The gallery seems like a dead end, but the art is disturbing and exploitative. It may very well be inspiring a sadistic killer, because in this instance, art doesn't imitate life, it imitates death.

Tipped off about a year-old murder that is a mirror-image of Kelly's crime scene, Gino and Magozzi enlist the aid of Grace MacBride and her eccentric, tech genius partners in Monkeewrench Software to help them decipher the digital trail that might connect the cases.

As coincidences emerge, Magozzi, Gino, and the team have to work around the clock at breakneck pace to unravel a series of clues that form the framework of a larger, more sweeping, and insidious conspiracy than any of them could have imagined. Is Kelly the last person to die or just the most recent? And is there any way to stop it?
***

This is the tenth book in the Monkeewrench series by P.J. Tracy.

I thought this was quite an interesting story and am glad I picked this up to dive into.

In this police procedural mystery we find a trophy wife, who is leading a double life, murdered in her best friend’s house. I have not read the other books in this series so I am not sure if the villain is new every time or moves from book to book.

I wasn’t familiar with the detectives either and they didn’t stand out to me in any way. It was the plot that shined in this novel. I would have liked to have more personal details about the detectives in order to make me want to follow them from book to book.

The Monkeewrench concept wasn’t defined here and I think it was assumed that by book ten we would know what that entity was. No one expects you to dive into the series on book ten. This tale was quite a twisty-turney one, but in the end it makes total sense.

Even though the detectives weren’t memorable, the story definitely was. The plot was a masterful piece of work and I will definitely be picking up more by P.J. Tracy!

I received this as an ARC (Advanced Reader Copy) in return for an honest review. I thank NetGalley, the publisher and the author for allowing me to read this title.
Posted by Toni at 1:26 PM