Of Spice and Men (Pancake House Mystery #3) by Sarah Fox 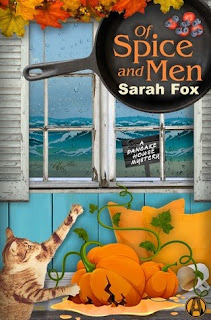 Of Spice and Men
(Pancake House Mystery #3)
by Sarah Fox

Goodreads synopsis:
Lights. Camera. Murder? Wildwood Cove’s star turn is soured by a sneaky killer in this delicious cozy mystery from the USA Today bestselling author of The Crêpes of Wrath.

With a Hollywood film crew in town to shoot a remake of the horror classic The Perishing, the residents of Wildwood Cove are all abuzz. Even Marley McKinney, owner of The Flip Side Pancake House, can overlook the fact that the lead actress, Alyssa Jayde, happens to be an old flame of her boyfriend. After all, the crew loves Marley’s crêpes—so much so that Christine, the head makeup artist, invites her onset for a behind-the-scenes tour. But when Marley arrives, the special-effects trailer is on fire . . . with Christine inside.

The cops quickly rule Christine’s death a murder, and Alyssa a suspect. Marley’s boyfriend insists that the actress is innocent, but when Marley sticks her nose into the complicated lives of The Perishing’s cast and crew, she discovers more questions than answers. It seems that everyone has a hidden agenda—and a plausible motive. And as the horror spills over from the silver screen, Marley gets a funny feeling that she may be the killer’s next victim.

This is the third book in the Pancake House Mystery series by Sarah Fox.

What a fun fall read! I am so excited for this series! Foodies definitely check this one out!

This main character is an everyday gal who is not so nosy to be annoying and just nosy enough to get the amateur sleuthing job done. Her business, The Flip Side Pancake House is the hangout mecca for all the locals. So, when a remake of a horror movie classic starts to film in her hometown, her shop is where they all come to dine… and handout the majority of the juiciest clues.

The original lead actress, Alyssa, is replaced by a different gal and Christine is the one who ends up in a trailer fire and killed. Considering the small number of cast on set, there are a number of suspects among them. Marley even worries that Alyssa, her boyfriend’s ex could be to blame even though she isn’t even in town during the course of the book.

I thought this was quite an interesting concept. I was glad to finally dive into a book in this series. It has been calling to me for awhile. I look forward to reading all the books in this series since it intrigues me so.

If you want to read a good cozy mystery with all the bells and whistles, definitely check this one out.

This is a book that I put into my own personal Buzzword Readathon using the word SPICE. Join me in this readathon for the remainder of October and halfway through November. Such a fun work to pick books by. After all, this is Pumpkin SPICE Season!

I received this as an ARC (Advanced Reader Copy) in return for an honest review. I thank NetGalley, the publisher and the author for allowing me to read this title.
Posted by Toni at 11:37 AM