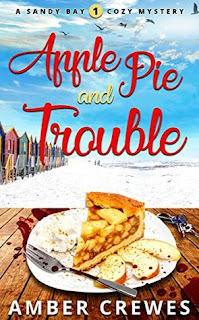 "If you love cozy mysteries, then this book will be an absolute delight."

Meghan Truman always had a dream to become a Hollywood actress. Hollywood decided she wasn’t good enough. She left Hollywood broken but with a burning desire to start afresh in the Pacific Northwest, pursuing her second dream – opening a bakery.

She never expected that the owner of a rival establishment would be found dead and all eyes would be focused on her as the prime suspect.

As the new girl in town with a new bakery store, she’s determined to clear her name and find the murderer; otherwise she’ll have to leave Sandy Bay penniless and pitiful and possibly the murderer’s next victim.

This is the first book in the Sandy Bay Cozy mystery series by Amber Crewes.

Basic plot: A fellow shop owner comes by and complains about Meghan starting her new business. He has a tea shop that offers bakery goods and he doesn’t need any competition. He tries to scare Meghan away but she is too stubborn for that. Then she tries to steal away his only employee who also happens to be his daughter. Then the man turns up dead and of course, Meghan is the prime suspect since he died from eating a piece of her apple pie.

I wish this book had been longer and more fleshed out. It has so much promise to be a 4.5 to 5 star book but with all the holes and gaps in time, I felt like it was more of a three star read for me. This is the first book in a series so I am sure it will only get better and better as the author learns about her characters and figures out their voice and intentions. The entire concept was a winner! Plot was outstanding. The actual villain was not even on my radar and I thought that was a great choice. Her motivation was on point.

I guess basically, I wanted more. I wanted to feel this world as if I lived there. Great start to a series that I am sure will only get better and better.