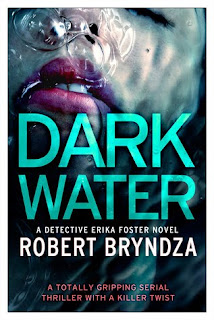 Goodreads synopsis:
Beneath the water the body sank rapidly. She would lie still and undisturbed for many years but above her on dry land, the nightmare was just beginning.

When Detective Erika Foster receives a tip-off that key evidence for a major narcotics case was stashed in a disused quarry on the outskirts of London, she orders for it to be searched. From the thick sludge the drugs are recovered, but so is the skeleton of a young child.

The remains are quickly identified as seven-year-old Jessica Collins. The missing girl who made headline news twenty-six years ago.

As Erika tries to piece together new evidence with the old, she must dig deeper and find out more about the fractured Collins family and the original detective, Amanda Baker. A woman plagued by her failure to find Jessica. Erika soon realizes this is going to be one of the most complex and demanding cases she has ever taken on.

Is the suspect someone close to home? Someone is keeping secrets. Someone who doesn’t want this case solved. And they’ll do anything to stop Erika from finding the truth.

From the million-copy bestselling author of The Girl in the Ice and The Night Stalker, comes the third heart-stopping book in the Detective Erika Foster series.

This is the third book in the Detective Erika Foster series by Robert Bryndza.

Bryndza sucked me in from the very beginning. I read this in one day practically straight through!

Basic synopsis: A tip leads to the discovery of a body in a 26 year old missing child case. The remains of a young girl are found in a quarry submerged in a box. Detective Erika Foster fights to get assigned to the case much to her superior’s chagrin and gets put on the case. She picks her team and they get to work.

There are roadblocks all over this case and at every turn Erika finds one dead end after another. She does find the original detective from twenty-six years earlier but the woman had turned to drinking and was a pale comparison to who she used to be. Being a part of the case spurs her to life somewhat and she cleans up her act as she digs for clues to give to Erika.

This book really keeps you on the edge of your seat almost from the very beginning. I liked how they tried to pair the beginning romance between Peterson and Erika with the mystery of the search for clues. And then when her sister showed up with all her kids in tow, what a hoot!  I wonder where her working relationship with her boss will go since he seems interested in her and she rebuffed his advances.

This is a complex book with a plot that keeps you guessing and suspects galore. Witnesses purposely hide details for what seems no reason which makes everything take much longer than it should. I am curious to see where all Erika’s relationship stand when the next book comes out. It will definitely be an interesting ride, that’s for sure!

If you love thrillers, police procedurals or detective fiction, definitely check this one out. You won’t be disappointed.

I received this as an ARC (Advanced Reader Copy) in return for an honest review. I thank NetGalley, the publisher and the author for allowing me to read this title.
Posted by Toni at 7:11 AM