Dead in Dublin (The Dublin Driver Mysteries #1) by Catie Murphy 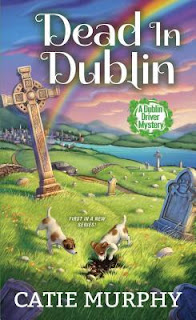 Dead in Dublin
(The Dublin Driver Mysteries #1)
by Catie Murphy

Goodreads synopsis:
In Dublin's fair city, where the girls are so pretty, murder occurs at the feet of sweet Molly Malone . . .

Ferrying tourists around Dublin for the Leprechaun Limo Service makes quite a change after years in the military. Still, Megan Malone is enjoying her life in Ireland. She likes the scenery, the easy pace, the quirky, quick-witted locals. Everything--except having one of her clients drop dead at the statue of fabled fishmonger, Molly Malone.

Most restaurant critics notch up their share of enemies. Elizabeth Darr, however, was a well-loved international star. She and her husband, Simon, had just had dinner when Elizabeth collapsed, and spoiled seafood is the first suspect. The restaurant's owner, worried her business is doomed, begs Megan to look into it. Between her irate boss and a handsome Garda who's both amused and annoyed by her persistence, Megan has her hands full even before she's cajoled into taking care of two adorable Jack Russell puppies (which she is almost definitely not keeping). But if cockles and mussels aren't to blame, can Megan find the real culprit . . .before another fishy death occurs?

This is the first book in the Dublin Driver mystery series by Catie Murphy.

There was quite a lot of build-up in this story. I had a hard time grasping the entire scenario. It wasn’t until the halfway point I had my feet under me and was understanding the concept of this book. I am not certain what had me stymied.

I didn’t get the lush sense of Dublin like I thought I would and I understand that you can’t do that constantly. I probably missed all the Ireland-esque build-up when I was so baffled at the beginning. Bummer on my part. I think a re-read might be in order now that I know what is going on. I might do that before book two comes out.

I had a hard time liking the main character since she went out of her way to hit a man when he was down. She didn’t know the entire circumstances of Simon’s life. He had already been arrested for his wife’s death (he was only a suspect at this point) and Megan went and threw him under the bus with a suspected drug selling idea she had. It was all heresay at that point and I think she should have let the police leap to their own conclusions in that aspect.

I enjoyed the last fourth of the book much more than the rest. The author really seemed to have a handle on their characters by that point and had related enough info to us that we could enjoy it too. I can’t imagine what a grand undertaking it must be to create a mystery world from nothing but your imagination. I believe the books after this one will be a much better representation of this author’s work. The world is now created and established. I will look forward to see how she plays in it.

If you love a good cozy mystery, check this one out and decide for yourself.

I received this as an ARC (Advanced Reader Copy) in return for an honest review. I thank NetGalley, the publisher and the author for allowing me to read this title.
Posted by Toni at 7:06 AM