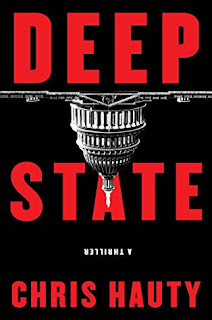 Goodreads synopsis:
Recently elected President Richard Monroe—populist, controversial, and divisive—is at the center of an increasingly polarized Washington, DC. Never has the partisan drama been so tense or the paranoia so rampant. In the midst of contentious political turf wars, the White House chief of staff is found dead in his house. A tenacious intern discovers a single, ominous clue that suggests he died from something other than natural causes, and that a wide-ranging conspiracy is running beneath the surface of everyday events: powerful government figures are scheming to undermine the rule of law—and democracy itself. Allies are exposed as enemies, once-dependable authorities fall under suspicion, and no one seems to be who they say they are. The unthinkable is happening. The Deep State is real. Who will die to keep its secrets and who will kill to uncover the truth?

Wow! What an awesome read! An unputdownable page-turner!! I am totally hooked on Chris Hauty’s writing!

Basic plot: Haley is an intern in the White House. As she goes about her duties, she uncovers a plot that caused the death of the Chief of Staff and the farther she gets into the mystery, the closer she comes to realizing there is an organization inside the US government that is working against them. Now the plot is centered on the President and they have put out a hit on him. Haley makes sure that doesn’t happen. That is a pretty big job for a lowly White House intern.

This book is so much more than that. I like the little glimpses you get into the lives of everyone Haley comes into contact with and what they do in the future. So unique in fiction. Not sure if I have ever seen anyone do that particular technique before.

I like how closed off Haley is and how she deals with conflict. She has a photographic memory and really helps her get out of quite a few jams. There is a big twist at the end that really had my jaw dropping.

This is my favorite book of the year so far! Excellent all around! And since this is a new author to me, I look forward to seeing what else he has written in order to be wow-ed again and again.

If you love a good political thriller, suspense, mystery, definitely check this one out. You won’t be disappointed.

I received this as an ARC (Advanced Reader Copy) in return for an honest review. I thank NetGalley, the publisher and the author for allowing me to read this title.
Posted by Toni at 1:22 PM