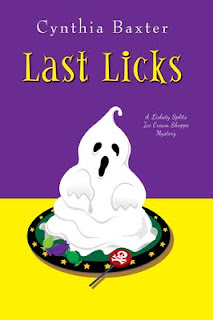 Goodreads synopsis:
It's autumn in the Hudson Valley, and Kate McKay has some tricks up her sleeve for a deliciously spooky season at her Lickety Splits Ice Cream Shoppe. But with a cold-blooded murderer thrown into the mix, the scares are about to become a little too real . . .

Kate receives the shock of a lifetime when she's blindsided by an offer she can't refuse. An assistant movie director desperately wants to shoot a key scene at Lickety Splits and she's willing to pay big bucks to sweeten the last-minute deal. All Kate has to do is tolerate a bustling film crew for a few hours and provide one important prop--a scoop of handmade ice cream . . .

But when up-and-coming actress Savannah Crane drops dead after spooning down some chocolate almond fudge, Kate's first taste of Hollywood might be her last. Someone poisoned the leading lady, and with Lickety Splits draped in yellow crime scene tape, detectives are ready to cast Kate as the leading suspect . . .

Determined to clear her name, Kate finds herself churning through a long list of unsavory characters to catch the real killer lurking around town. As she uncovers the truth about the jealous rivals and obsessive stalkers who haunted Savannah's life, Kate soon realizes that tangling with the late starlet's "fans" could make this her most terrifying fall yet . . .

This is the third book in the Lickety Splits mystery series by Cynthia Baxter. I am not certain why the publication dates is December 31st for this particular title since it would have been a perfect late September release. There are all things fall and cozy in this story and the ice cream shoppe is all decked out for Halloween too.

This mystery was fascinating and they paired the problems Kate has in her love life alongside the mystery making it so hard to look away or put the book down. Also, a movie company comes to the shoppe and wants to film an important scene.It was cool reading about all the tv stuff and that led quickly to the murdered Hollywood starlet who was just catching her rising stardom. Kate becomes suspect number once since the police believe the victim was poisoned using the bowl Kate had personally chosen.

Kate’s niece Emma and her mother are quite stellar in this too. Loved how they were crafted into the story. That big twist at the end was surely nice and shocking too! Always love when an author can surprise us with the wow factor. Never saw that one coming!

Definitely loving this ice cream shoppe series. You should check it out if you love bakery mysteries, this would be right up your alley. Take a big bite out of this one. You won’t be disappointed.