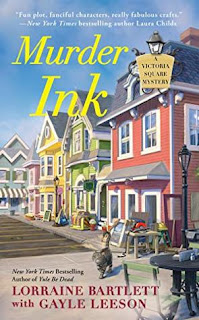 Goodreads synopsis:
The charm of Victoria Square may prove to be only skin deep when murder follows the arrival of a tattoo parlor in town in this latest installment of the New York Times bestselling series.

A tattoo parlor on Victoria Square? Some of the merchants get hot under the collar at the proposal, but could they be driven to kill to stop it? That's what the sheriff's office and Katie Bonner want to know when the building's owner is electrocuted with his own saw.

Meanwhile, tensions rise when a hot chef takes over the square's tea shop. Will Katie have three men vying for her affections, or will her rival take the tea cake?

This is the sixth book in the Victoria Square Mystery series by Lorraine Bartlett and Gayle Leeson.

I  have read one other book in this series and it was so good to see these characters and dive back into this world. There are some cozies that don’t meld in my mind but this one did and its effect lasted.

Victoria Square contains a pretty conservative bunch of shops. So when a tattoo parlor wants to join their little community, there is an uproar amongst the vendors. Then the brother of the tattoo shop owner dies mysteriously from an electrocution using one of his own tools. Former Detective Ray Davenport is suddenly suspect number one. Katie makes it her mission to prove that Ray is innocent but there are roadblocks at every turn. Ray’s girls suddenly hate her causing Ray to keep her at arms distance. And both he and her boyfriend Andy are acting weird. There is a rumor going around that she doesn’t appreciate the men in her life and this puts romantic tension between Katie and Ray and Katie and Andy. Both men want a relationship with her but Katie wants more independence.

I liked how this story waffled between Katie’s love trials and search for independence and the whodunit aspect of the cozy. I almost think I was more enthralled with all the relationship problems. I am most intrigued by Ray Davenport and wish they would get together for a book or three.

All the characters in the Victoria Square universe are pretty interesting and I think there could be a lot of future book prospects among them and their issues with Katie and V-Square.

If you love a good cozy with a rich world full of promise and snark, this book is for you. Definitely pick this one up and give it a try.

I received this as an ARC (Advanced Reader Copy) in return for an honest review. I thank NetGalley, the publisher and the author for allowing me to read this title.
Posted by Toni at 10:08 AM