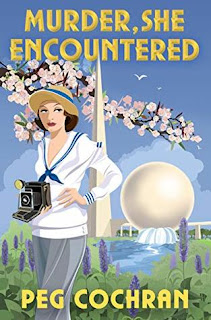 New York City, 1939. A rising star at the Daily Trumpet, Elizabeth “Biz” Adams has been sent to the World’s Fair—billed as the “World of Tomorrow,” a look toward a brighter future even as the drumbeats of war grow louder—to cover a robbery. What she stumbles upon instead is a dead woman, dumped into the Aquacade’s pool with a nylon stocking wrapped around her neck.

Elizabeth snaps a photo as the police arrest Joey Dorman, a gentle young hot dog vendor who made no secret of his obsession with the murder victim. Even though she’s thrilled that her photo makes the front page, the fear and confusion evident on Joey’s face are haunting. So Elizabeth vows to prove his innocence—or his guilt—with her partner at the Daily Trumpet, Ralph Kaminsky. Meanwhile, her romance with Detective Sal Marino is heating up, and Elizabeth is more determined than ever to follow her heart.

But when Kaminsky’s efforts to expose the real killer land him in the hospital, Elizabeth is forced to continue the investigation on her own. And as she tries to narrow down the long list of suspects, she discovers a dark secret running through the Fair—a secret some would kill to protect.

This is the third book in the Murder, She Reported mystery series by Peg Cochran.

This series just keeps getting better and better. I reviewed book two MURDER, SHE UNCOVERED back in May and gave it four stars. I will definitely need to pick up book one just to complete my series reading.

This book is just all old-fashioned journalism set in 1939 at the World’s Fair in New York. Elizabeth “Biz” Adams is out main character during a time when women weren’t exactly taken for their word about things. Back then the guys were in charge and very few women had jobs like Biz does in this book. It is definitely quite different from now. I cringe when the police let the reporters wander onto a crime scene. Since this is set way before CSI was ever a thing, there is no wonder rules aren’t in place to keep the scene safe from outside influence. Forensic clues mean nothing in this time period unless there was a clever Sherlock Holmes wannabe in their midsts. And so far I haven’t discovered one in this series.

Biz is quite clever and has a unique outlook on life due to her wealthy parents and her ability to have a lot of things others in her community have to go without. She is very cognizant of this fact and plans through much of the book to move out and live on her own away from the family.

Biz is a photographer for the Daily Trumpet working with a veteran reporter named Kaminsky. He is away in the hospital for much of this story so Biz is set loose to discover the clues all on her own which I found refreshing. A woman is found at the fair dead. She works for the Dupont exhibit where they are revealing nylon stockings and this is what is used as the murder weapon.

The first suspect is, of course, the boyfriend. And when that man is found dead not long later, the police are scratching their heads and this pushes our Daily Trumpet reporter to dig more into the details of the case and putting her in a more and more dangerous position.

I enjoyed this book and look forward to other books in this series. This feels like almost a whole new cozy mystery genre since it is not as fresh and clean as most cozies and has a bit more grit than I am used to. And more grit is not necessarily bad. In this case, it is very good. Very, very good. Keep up the great work, Ms. Cochran! I appreciate you!

If you love a good cozy mystery, definitely check out this one. You won’t be disappointed.

I received this as an ARC (Advanced Reader Copy) in return for an honest review. I thank NetGalley, the publisher and the author for allowing me to read this title.
Posted by Toni at 11:38 AM