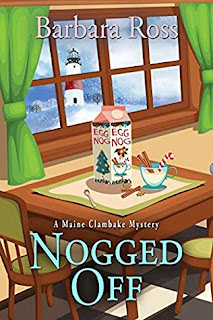 Goodreads synopsis:
‘Twas the week before Christmas, and Julia Snowden’s escape from New York has just hit a snag. Fresh off accidentally poisoning half her colleagues with her “Killer Eggnog,” Julia’s would-be subletter, Imogen Geinkes, is now jobless and homeless—leading Julia to invite the young woman home for the holidays in Maine. But when they unload the rental truck in Busman’s Harbor, they find something that wasn’t on anyone’s packing list: the body of Imogen’s former boyfriend.

Suddenly, the wordplay in Imogen’s name—“I’m a jinx”—isn’t so adorable. But for all the calamities that follow in Imogen’s wake, Julia’s certain she’s no killer. As Julia digs into the case, the appearance of the ex’s brother—his identical twin—doubles the confusion. Has Imogene been double-crossed by an evil twin? Was the eggnog “accident” no accident at all? If Julia doesn’t unwrap the murderer’s true identity soon, one of the twelve days of Christmas could be her last . . .

This is the 4.5 book in the Maine Clambake Mystery series by Barbara Ross. This was previous published in a holiday anthology back in 2016 titled: Egg Nog Murder.

Julia had been living in New York and her subetter Imogen Geinkes has a few problems in her life. She lost both her job and her boyfriend in one fell swoop. For her Christmas is sucking the life out of her. Julia, being a good friend, invites her back to Maine to stay with her for awhile. Little does she know that Imogen’s name spells out “I’m A Jinx!” Once back home a lot of chaos ensues, and we begin to wonder if Imogene is just unlucky or doing this to get attention. Then the body of Imogene’s boyfriend shows up dead. Did I mention that his brother is his identical twin? To say something is fishy in Maine is an understatement.

I thought this was a well thought out and plotted mystery. I enjoyed watching Julia react to Imogene and wondered what was really going on behind it all. I had to clue and was gobsmacked when the real killer was revealed. Face slap! I did not see that one coming!

I am definitely going to make the Clambake mystery series a priority in 2020 since I have so many of the books in paperback on my shelves.

If you love a good cozy mystery, definitely check out this one. You won’t be disappointed.

I received this as an ARC (Advanced Reader Copy) in return for an honest review. I thank NetGalley, the publisher and the author for allowing me to read this title.
Posted by Toni at 9:17 AM