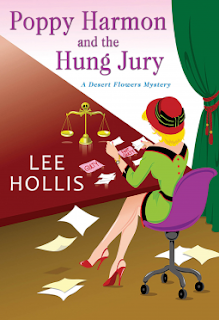 Goodreads synopsis:
For retiree-turned-PI Poppy Harmon, spending her golden years running the Desert Flowers Detective Agency is far from the glamorous life she once knew. But becoming ensnared in two twisted Palm Springs crimes might be her worst look yet . . .

If Poppy didn't believe she was in too deep as the only female juror in a high-profile assault case involving an infamously hot-tempered crooner, she's sure of it upon meeting blast-from-her-past Rod Harper. A former TV co-star from her short-lived acting days, Rod is as dashing as ever, and now he wants to partner again--this time to locate his missing daughter . . .

Returning a pampered songstress with a penchant for running away back home unscathed shouldn't be too challenging. But dodging Rod's charms while on the job is another story--and so is finding a dead body! When Poppy discovers a fellow juror face down in a swimming pool, she's unwittingly thrust into a murder investigation with sinister parallels to the troubled chanteuse's disappearance . . .

As Poppy struggles to survive a steamy love triangle while deciphering the connection between two seemingly unrelated cases, the Desert Flowers Agency must outsmart a ruthless killer who will do anything to keep hideous secrets hidden away . . . including ensuring Poppy becomes the next forgotten ex-actress to bite the dust . . .

This is the second book in the Desert Flowers mystery series by Lee Hollis.

What a hoot this was. Every child of the 80’s will get a kick out of this cozy mystery! This is Remington Steele meets Charlie’s Angels meets Magnum PI meets Perry Mason all wrapped up in one delicious cozy of a mystery.

Poppy Harmon used to be the Della Street to Rod Harper’s Magnum PI/Perry Mason character for three seasons in the 80’s. Poppy has since retired from working on television and now owns a PI agency with her two best friends Violet and Iris. In order for their agency to be taken seriously, Poppy has hired a young 28 year old actor named Matt to be the face of their business (a la Remington Steele).  Now Rod Harper has come to their agency in order to find his daughter who has disappeared. Once he sees Poppy again, Rod wants to rekindle their one time relationship into something much bigger.

In the meantime, Poppy has been serving on the jury of a popular singer which resulted in a hung jury when one man remained a standout and wouldn’t even consider the facts of the case. Poppy sees this juror and the singer exchange telling look which makes Poppy believe this could have been a case of jury tampering. And when this juror is found dead a few days later, Poppy knows something fishy is going on.

There was an interesting dynamic in this book between Poppy’s current on again/off again beau Sam and the shiny new blossoming relationship with Rod. I loved every second of this and plan to pick up book one in the series ASAP.

If you love a good cozy mystery that gives you all the feels, definitely pick this one up. You won’t be disappointed.