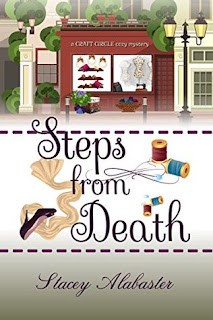 Goodreads synopsis:
When you’re the new girl in a small town, you have to step out of your comfort zone and meet new people. But sometimes that can leave you only Steps from Death.

Georgina is the new owner of a craft store in a small town. When a woman is found dead after falling down the stairs, she suspects foul play. After learning her new home has a similarly tragic past, she begins to fear for her own safety. Can she unravel the mystery of two suspicious deaths before she becomes the third?

Steps from Death is part of the Craft Circle Cozy Mystery series. If you like fast paced mysteries full of quirky characters and unexpected twists, you’re gonna love Steps from Death.

This is the first book in the Craft Circle Mystery series by Stacey Alabaster.

Sometimes I think first books are the hardest to write. You have to really get into your character’s head, make all kinds of decisions about plot, setting, motives, suspects, red herrings, who the villain is and then dive into the actual writing of the thing. I thought this did all those things pretty well. I enjoyed reading this and have picked up a nine book set in order to read through a lot of the series.

These are really quick reads and you get a lot of bang for your buck.

Basic synopsis: Georgina is new to town and has been a pretty busy bee.. she opened a craft shoppe, bought a new house, and adopted a shelter dog. This all happens before the story really begins. Then she hears about her new friend, Angela, a fellow crafting geek, falling down the stairs and then later realizes she is dead. Major bummer for Georgina since she was having trouble finding people she can relate to. Not long later she discovers that the house she thought she got a super deal on had a similar accident happen ten years earlier resulting in a death. Now Georgia has two mysteries on her hands.

I can tell this book was a bit of a struggle for the author since so many people were at odds with the main character. The town seemed to struggle with accepting Georgina and it is no wonder she questioned her being there at every turn.

I have a good feeling about this series and think it is going to be a big winner in the crafting cozy sub-genre. Love discovering new talent. So much promise here! I  am excited to see more!
Posted by Toni at 10:06 AM