The Look-Alike by Erica Spindler 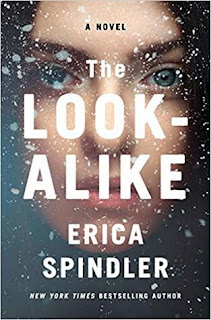 The Look-Alike
by Erica Spindler

Goodreads synopsis:
From the New York Times bestselling author of The Other Girl and Justice for Sara comes a thrilling psychological drama about a woman who believes she escaped a brutal murder years ago—but does anyone else believe her?

Sienna Scott grew up in the dark shadow of her mother’s paranoid delusions. Now, she's returned home to confront her past and the unsolved murder that altered the course of her life.

In her mother’s shuttered house, an old fear that has haunted Sienna for years rears its ugly head —that it was she who had been the killer’s target that night. And now, with it, a new fear—that the killer not only intended to remedy his past mistake—he’s already begun. But are these fears any different from the ones that torment her mother?

As the walls close in, the line between truth and lie, reality and delusion disintegrate. Has Sienna’s worst nightmare come true? Or will she unmask a killer and finally prove she may be her mother’s look-alike, but she’s not her clone?

From the title, this wasn’t exactly what I was expecting. I guess I figured it would be a crazy lookalike woman kills someone or stalks the main character kinda in a single white female fashion. That wasn’t what was offered up in the text. What I got was better. It was basically about a gal who is coming home after ten years to deal with the fallout of a decade old murder she witnessed and how it affected her then and now.

There is a lot of flash-backing going on in this book. When I finally realized it was jumping back and forth in time, I was able to easily see the transitions between then and now.

Sienna stumbled across a dead body of a girl who was wearing the same exact coat as she. In the beginning she believes that maybe the murderer may have been after her since she always takes that cut through at midnight after her last class. The whodunit in this was excellent. I kept waffling back and forth like Sienna did wondering who could have been the guilty party and why.

Just an excellent read. I don’t want to give too much away since it is the discovery of all the clues that makes this so awesome. If you are looking for a mystery that is not run of the mill and one that you can really dig your teeth into, read this!

If you love a good mystery thriller, definitely check this one out. You won’t be disappointed.

I received this as an ARC (Advanced Reader Copy) in return for an honest review. I thank NetGalley, the publisher and the author for allowing me to read this title.
Posted by Toni at 8:49 AM