The Third to Die (Mobile Response Team #1) by Allison Brennan 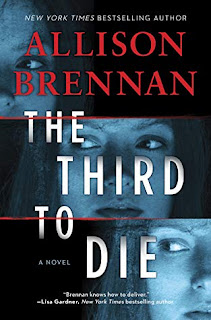 The Third to Die
(Mobile Response Team #1)
by Allison Brennan

An edgy female police detective…An ambitious FBI special agent. Together they are at the heart of the ticking-clock investigation for a psychopathic serial killer. The bond they forge in this crucible sets the stage for high-stakes suspense.

Detective Kara Quinn, on leave from the LAPD, is on an early morning jog in her hometown of Liberty Lake when she comes upon the body of a young nurse. The manner of death shows a pattern of highly controlled rage. Meanwhile in DC, FBI special agent Mathias Costa is staffing his newly minted Mobile Response Team. Word reaches Matt that the Liberty Lake murder fits the profile of the compulsive Triple Killer. It will be the first case for the MRT. This time they have a chance to stop this zealous if elusive killer before he strikes again. But only if they can figure out who he is and where he is hiding before he disappears for another three years. The stakes are higher than ever before, because if they fail, one of their own will be next…

This is the first book in the Mobile Response Team series by Allison Brennan.

What a fantastic beginning to a series. This was an intense one! I really enjoyed the main characters Matt, Kara and the beginnings of the Mobile Response Team. Plus, they already have a great foil in the guise of a good guy, Thornton as the book moves into series mode.

As you read along you can almost tell who is going to be the red shirt in this novel. (Red Shirt is a Star Trek reference as to those people who end up dying at some point in the show. They would always wear a red shirt and thus condemning them to death.) I felt bad for that particular character because I could see it coming. I was disappointed a bit at who was and was not moving on into book two. I had grown quite fond of a few of them and their possibilities for further story growth.

Kara was quite an edgy steamroller. Loved her contribution to the storyline. And Mathias had similar qualities to Kara which made the time they had together so explosive and fun to watch.

Basic premise: A person of unknown origin is killing people in threes starting on March 3rd, then 6th, then 9th. The first is a nurse, then someone in a position of power at a school and then a police officer. This serial killer is killing in this way and has done so for many years. It is only now that the pattern is being noticed and understood. Mathias and his Mobile Response Team is called in to deal with the deaths, current ones and possible ones to come.

You get the perspective of the killer in this as well as a glimpse into the workings of the Mobile Response Team. The guy is crafty and hidden in plain sight which makes this all a pretty intense and scary read. Once you get to know all the characters, you really don’t want any of them to die at the killer’s hand. Brennan has a great way of endearing us to her book people and making us invested from the very beginning.

Loved this book. It’s a five star read from me!

If you love a good suspense mystery thriller, definitely check this one out. You won’t be disappointed.