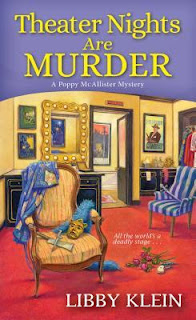 Poppy thought her toughest challenge this winter would be sticking to her Paleo diet and filling all her orders for her gluten-free goodies, but now she has to choose between two suitors. She's not the only one with boyfriend drama. Aunt Ginny's long-ago high-school beau, Royce Hanson, a retired Broadway actor, has returned to Cape May, New Jersey, to star in a Senior Center staging of Mamma Mia. Leaving Aunt Ginny to wonder: What's his motivation?

Slated to open February 13th, the problem-plagued production seems to be cursed--with stolen props, sabotage, and even a death threat. But when a cast member plunges to his death from a catwalk, it soon becomes clear a murderer is waiting in the wings. Now Poppy, Aunt Ginny, and a supporting cast must take center stage to catch the killer--before it's curtains for someone else . . .

This is the fourth book in the Poppy McAllister Mystery series by Libby Klein.

Poppy McAllister has a problem. She is in love with two men! And she can’t decide which to pursue. So, she relents and joins the crew of the new Mamma Mia musical happening in their local theater. A veteran actor returns to town to appear in the starring role. Poppy’s Aunt Ginny is perfect for the role of Donna but gets kicked back to costumes due to some theater politics. When the retired police officer who wanted them put on his self-written play dies, everyone realizes that all these accidents just might not be accidents at all.

This book really keeps your attention the entire way through. Everyone seems to have double motivations to have done the deed. Since I participated in a lot of theater in high school, this gave me all the warm feelings and transported me back to those fun theater days. Just when you think the murder is about to be solved, something else happens to further complicate things. It all seems so straightforward in the beginning and by the end what we are left with is a complicated mess. (A mess for the characters, that is.) So many lies and secrets are uncovered they could start their own soap opera without any problem.

Great book! I plan to read more by this author very soon!

If you love a good cozy mystery that gives you all the feels, definitely pick this one up. You won’t be disappointed.