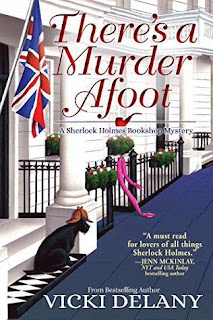 Gemma Doyle and her friends travel to London for a Sherlock Holmes convention--but will Gemma's father take the fall for a felonious forger's fatality?

The 6th of January is Sherlock Holmes's birthday, and lucky for Gemma Doyle, January is also the slowest time of the year at both the Sherlock Holmes Bookshop and Emporium, and Mrs. Hudson's Tea Room. It's a good time for Gemma and her friends to travel to England for a Holmes Convention. For Gemma, the trip provides an opportunity to visit her parents, Jayne Wilson is excited about seeing all the sites London has to offer, and Ryan Ashburton just wants to spend some time with Gemma. But the trip is immediately derailed when Gemma's father Henry recognizes his brother-in-law Randolph Manning, who disappeared more than thirty years ago on the night he stole a valuable painting from his own parents.

Henry, a retired detective with Scotland Yard, has been keeping tabs on the man's career as a forger of Old Masters and he warns Randy to stay away from his family. Randy is at the conference selling his own art, a series of sketches inspired by the Holmes Canon. The ever-observant Gemma notes that he isn't exactly popular with some of the other conference attendees, but when Randy is found dead after the banquet with a dazed and confused Henry Doyle standing over him, the police leap to assume his guilt. It's up to Gemma, with the help of her friends, to plunge into the "lowest and vilest alleys" of London to save her father from prison.

Wow! What an awesome read! I am totally hooked on Vicki Delaney and her Sherlock series!

This is the fifth book in the Sherlock Holmes Bookshop Mystery series by Vicki Delany.

Gemma Doyle owns a Sherlock themed bookstore and tea room. She and her friends travel to England to attend a Sherlock conference so Gemma can accept an award for her uncle. While she is there, she meets an uncle she never knew about who was apparently a pretty shady guy. When her dad is found holding a rope to her uncle’s neck, Gemma and her sister Phillipa start investigation into who really wanted her uncle dead. And what they turn up is is a huge kettle of fish.

I found this book quite fascinating. I have always loved Sherlock and his stories. This is a cool twist on the theme. Gemma is the maybe relative of Sir Arthur Conan Doyle. The text wasn’t clear whether it was a fact or not. Gemma is very much like Sherlock in how she thinks. And her sister is sort of MI-5 like with a job no one really knows the description of. She works for the government is all you really glean but as the book progresses you realize that her boss is most likely the Queen herself.

The mystery really had me guessing all the way through.  It was really unputdownable! I am definitely making this series a priority to read in 2020!

I received this as an ARC (Advanced Reader Copy) in return for an honest review. I thank NetGalley, the publisher and the author for allowing me to read this title.
Posted by Toni at 1:10 PM