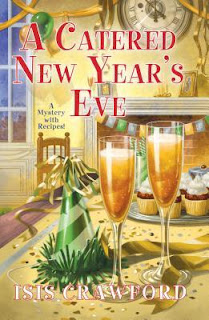 Goodreads synopsis:
Sisters Bernie and Libby Simmons are reunited with a distant relative who wants them to cater a New Year's Eve event--and help find a guilty party . . .

It's been years since Bernie and Libby's parents became estranged from Ada Sinclair's side of the family--though the reasons for the rift are lost to history. The sisters, however, are intrigued when Ada makes contact. She tells them about the long-ago deaths of her father and his business partner, which happened within hours of each other--and were both ruled accidental.

Ada thinks otherwise--and has a plan. On New Year's Eve, she'll gather a group of guests and read from a diary she's found in her mother's attic that she thinks will expose the culprit. The Simmons sisters agree to provide refreshments for the bash, and when the night arrives, Ada's ready to count down to a confession. But as midnight approaches, a guest drops dead. It looks like the menu tonight includes champagne and cyanide . . .

In the tumult, the diary disappears. When Ada is arrested for murder, she'll have to hope that Bernie and Libby can provide a resolution before the clock runs out.

This is the fifteenth book in the A Mystery with Recipes series by Isis Crawford.

The book starts out with an Agatha Christie-like gathering of all the suspects in a room and a woman named Ada is trying to ferret out a killer of her father and business partner by reading from a diary she found in her mom’s attic. Bernie and Libby get drawn into this mess as Ada’s friends. Then someone from this bizarre meeting dies and Ada is suspect number one. Now Bernie and Libby have to clear her name and save her from the mess she stirred up.

I felt like this was a little convoluted at the beginning and since this was the first book I had read in this series, it’s no wonder. I had a lot of missing backstory that a normal follower would already know. But once I got the main characters clear in my mind, it was much easier to navigate this. I wish there had been more of the “catering aspect” in the book since that seems to be the thrux of the series premise. Other than that, I felt the flow of the mystery was good. And the whole red herring aspect was in full force since every time I thought I knew who the suspect was, they turned up dead or cleared of wrong doing.

The ending provided quite a twist! I really need to dust off my whodunit muscles since authors are really throwing me for a loop with all these least likely suspect people coming out of the woodwork with ulterior motives.

This started out a bit on the wobbly side but that was mostly due to the fact that it was my first time reading this author and this particular series. This turned out to be quite a good jaunt into the cozy mystery genre and I know I will be picking up a book from this author again in the future.

If you love a good cozy mystery check this one out. You won’t be disappointed.