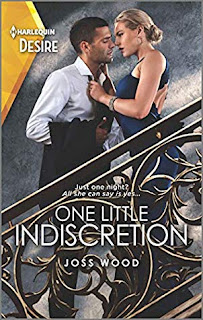 All she can say is yes…

And this time she must resist temptation…

Sadie Slade isn’t interested in romantic entanglements. She’s been there, done that. But handsome CEO Carrick Murphy tangles things up for her—fast. Their steamy one-night stand has made them parents-to-be. And she still can’t stop fantasizing about a repeat with the stubborn bachelor—despite the secrets they’re both keeping. Is it time for them to take a chance on happiness?

I thought this book was really good. I liked the whole aspect of her being this cool art historian and he being the aloof CEO. I did feel like they jumped into the sack a bit too early in the story. I was  barely getting my bearings about what was going on before, BAM, sex. I know this is a Harlequin Desire and I should expect such things, but still, it was a little too early for my taste.

I also enjoyed how Sadie grew during this book and started to stand up for herself in a lot of her relationships: parents, friends, boyfriend, etc. I also liked that other characters were introduced that you know will have their own book at some point in the future. Joa did suddenly take over as the POV character for a short bit and that kind of threw me. I feel the main POV characters should stay the main POV characters even when introducing others for future books. I don’t need to be in Joa’s head since in the larger scheme of things, she has nothing to do with the main thrust ofd the story.

Overall, I enjoyed this. I liked the setting and the characters. Just a great read to pick up on a rainy/snowy day.