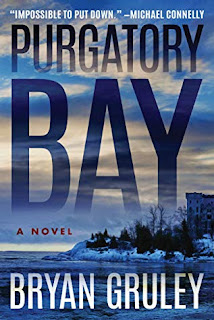 Goodreads synopsis:
Twelve years ago, her life was torn apart. Now those who wronged her will pay.

Jubilee Rathman is a straight-A student and star soccer goalie destined for Princeton—until her family is brutally murdered. Twelve years later, she lives in a virtual fortress on Purgatory Bay near Bleak Harbor, plotting revenge on the people she considers responsible.

In her crosshairs is former reporter Michaela “Mikey” Deming, who Jubilee believes got her family in trouble with the Detroit mob. As retribution, Jubilee kidnaps Mikey’s sister and daughter, and that’s just the start in her ruthless quest for justice.

Bleak Harbor police chief Katya Malone, still reeling from her failure to find a kidnapped boy, leads the investigation. She’s determined to keep history from repeating, but Jubilee is more cunning than Malone can imagine.

All Mikey and Katya can do is follow Jubilee’s dangerous trail of clues. But in Bleak Harbor, nothing is what it seems, and no one can be trusted. As an ominous end draws ever nearer, the women must face the misdeeds of the past to find the kidnapping victims before it’s too late.

This is the second book in the Bleak Harbor series by Bryan Gruley. Funny thing about this was that it didn’t feel like a second book. It felt like a standalone.

This book was very good but in the beginning it was a little hard to follow. The POV character kept jumping around between Jubilee, Michaela and Katya. I was letting my Kindle read the text to me and since I didn’t see the text shift, I think that was why it was more confusing for me. If I had been reading the text, I think it would have been easier to navigate since you get so many more visual clues with text formatting and chapter breaks.

Basic premise is that a woman is dealing with the loss of her family from twelve years ago. They were murdered and the police didn’t exactly treat her very nicely back then. Plus she blames reporter, Mikey, for ratting them out and causing the mob hit on their family. This leaves the girl with quite a grudge. In the twelve years after the hit, Jubilee has set up quite a compound. She starts her revenge by kidnapping a blind woman named Octavia.

Once the story gets rolling and all the players are on the table, the story is much less confusing. It is exciting and edge of your seat thrilling. It is also a quick and satisfying read too. Definitely a series you need to keep your eye on.

If you love a good mystery suspense thriller, definitely check this one out. You won’t be disappointed.