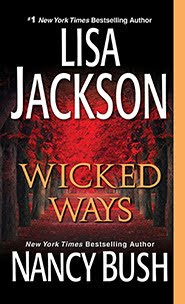 Elizabeth Gaines Ellis is an ordinary suburban wife and mother. That's what she tells herself as she flits between her realtor job, yoga class, and caring for her daughter, Chloe. But for months now, Elizabeth has worried that she's far from normal…that she's somehow the cause of a series of brutal, horrible deaths.

Her mean-spirited boss. A bullying traffic cop. Her cheating husband. Elizabeth had reason to be angry with them all. She didn't mean for them to die. No one will take her fears seriously--except the private investigator prying into her past. . .

Too Close To See

The more scared and angry Elizabeth becomes, the higher the death toll grows. But those who wrong her aren't the only ones in danger. Because others have secrets too, and a relentless urge to kill without mercy or remorse…

This book did not feel like it was the fourth/sixth book of a series. It felt really fresh and more like a standalone. I enjoyed the heck out of this book. It is one of those reads that really keeps you on your toes and continually trying to figure out what is really going on.

The “bad guy” in this goes unnamed so it is a bit thrilling to weed out who among the currently revealed characters this might be.

My favorite part had to be the connection between Elizabeth and Rex, the private investigator. And also the annoying Ravina, Elizabeth’s not known about cousin was quite a hoot as well. Before her age was revealed I was reading her as if she was this quirky 60-ish woman. Then I later realized she was much younger and in her early twenties.

Main premises is that Elizabeth has always had a gift. She sees things before they happen and has been instrumental from saving more than a few lives over the years. And much like how a tarot reader cannot fully understand messages for themselves, Elizabeth couldn’t decipher the clues that were coming in for her about her own life and situation. She had a mental stalker who had all these feelings for her and was willing to do anything, even kill to make her happy. Elizabeth began to think her “gift” was somewhat a curse when these people she had wished dead or injured actually ended up on the coroner’s table. Most of the action happens right after Elizabeth discovers that her husband has been cheating on her and he suddenly is killed by a woman driving a similar SUV to the one Elizabeth drives and the driver looked suspiciously like she did causing the police to continually want to question her and peg her for the culprit.

Such a good book! I was hanging on every word wanting it to end and yet wanting more information about certain characters. I really wanted to see the relationship between Elizabeth and Rex blossom. That totally hooked me. I am a sucker for a great love at first sight story.

This has a lot of supernatural elements but it seemed to be tamped down a bit due to the melding of the universe created by Jackson and the other one created by Bush. I love the idea of these two writing together and plan to read more into these two series just to see where all the world-building has come from.

If you love a good mystery suspense thriller, definitely check this one out. You won’t be disappointed.