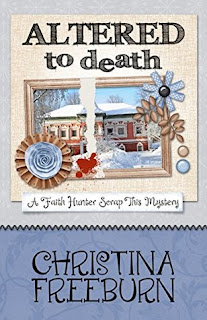 Goodreads synopsis:
Even knee-deep in planning her wedding, Faith Hunter finds herself distracted by the town scrapbook she was commissioned to create. Eden’s oldest mystery, the founding family’s exodus nearly a hundred years ago, remains unsolved. When a search through the family’s abandoned mansion leads to the uncovering of bones on the property and ex-boyfriend Steve Davis announces a surprise heir has staked a claim, Faith is determined to dig up the truth left behind.

Meanwhile, family friend Wyatt Buford asks Faith to look into his deadbeat father’s disappearing act and his connection to the murder. Her quest for answers unearths secrets past and present that some would prefer stay buried at any cost. Faith’s resolve to present the facts and nothing but about Eden’s history could lead to her own future being cut short.

This is the sixth and last book in the Faith Hunter Scrap This Mystery series by Christina Freeburn.

In this book Faith has been hired by the city council to create a town historical scrapbook. While in the midst of finding fodder for her pages, a skeleton is found on the grounds of the founding family’s estate and this discovery uncovers a whole can of worms. Even Steve, Faith’s ex-boyfriend, gets in on the act.

I didn’t quite understand why Steve quit his previous job. I got the impression during the book that he was a bit shady in his business and he hadn’t previously in other books displayed this tendency. I thought since he and Faith were still friends he would be more open about what was going on.

I enjoyed getting to see more townspeople in this installment. The mystery was compelling and I was laughing as Faith got stuck on the root mere feet from where her soon to be groom was standing. Funny stuff.

At the end of the book five, Ted proposed to Faith, and I am sort of annoyed that whole scene took place off camera, so to speak. I would have loved to see the proposal in the pages of the book. I think we, the fans, deserved to see that precious moment since it was one of the milestone things that happened in the series.

I am totally going to miss this series since this crafting type mystery is one of my favorite genres in the cozy mystery realm.

I received this as an ARC (Advanced Reader Copy) in return for an honest review. I thank NetGalley, the publisher and the author for allowing me to read this title.
Posted by Toni at 11:51 AM