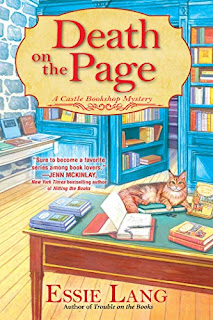 Death on the Page
(Castle Bookshop Mystery #2)
by Essie Lang

Thousand Islands bookstore owner Shelby Cox sleuths the slaying of a true-crime writer who may have learned too much about a murder case that should have stayed shut.

There are a thousand stories in New York's scenic Thousand Islands, and Bayside Books co-owner Shelby Cox stocks them all. But lately, the Blye Island bookseller's life is more about investigation than inventory. True-crime writer Savannah Page caps off two successful signings at Bayside Books with a night in Blye Castle. She's there to research Joe Cabana, a colorful Prohibition-era mobster who owned the castle--until he was found dead in the island Grotto.

But crime becomes all too true for Savannah. Her body turns up the next morning, in a secret passage at the bottom of the stairs. The last thing Shelby Cox wants is to sleuth another murder, but she's intrigued about how a killer could have reached the island after hours. She's not at a lack for suspects either. It could have been anyone from Savannah's fiancé, Liam Kennelly, who argued with her the evening before, to island caretaker Matthew Kessler, recently cleared of his wife's murder. Can Shelby keep regular store hours, elude the police chief, and assemble the clues into a hard-bound case without getting permanently shelved?

This is the second book in the Castle Bookshop Mystery series by Essie Lang.

Shelby Cox runs two bookshops in Alexandria Bay, New York. One is on an island inside Blye Castle and the other is on the mainland. At the Castle location Shelby has a book signing with popular author Savannah Page. The Heritage Society even allows the author to stay the night inside the facility. A day later they discover the author dead at the bottom of the stairs. Shelby had previously been a book editor and came to the store to help out her friend. Now she has made the position permanent. The author had been researching a local by the name of Joe Cabana who had been murdered in the island decades before.

The mystery was well-crafted and all the quirky and charming characters were easy to distinguish from one other. Plus, I think This castle setting will have a slew of possibilities when more secret passages and castle history are uncovered.

This book was quite a roller coaster ride. I couldn't read fast enough to discover the identity of true killer. I look forward to reading all future books in this series.

If you love a good cozy mystery, definitely check this one out! You won't be disappointed.

I received this as an ARC(Advanced Reader Copy) in return for an honest review. I thank the author, the publisher and NetGalley for allowing me to read this title.
Posted by Toni at 11:26 AM