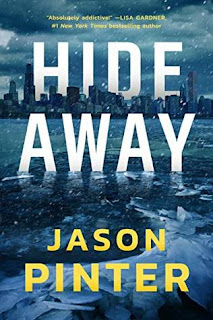 Goodreads synopsis:
From the bestselling author of the Henry Parker series comes a page-turning thriller about a vigilante who’s desperate to protect her secrets—and bring a killer to justice.

On the surface, Rachel Marin is an ordinary single mother; on the inside, she’s a fierce, brilliant vigilante. After an unspeakable crime shatters her life, she changes her identity and moves to a small town in Illinois, hoping to spare her children from further trauma…or worse. But crime follows her everywhere.

When the former mayor winds up dead, Rachel can’t help but get involved. Where local detectives see suicide, she sees murder. They resent her for butting in—especially since she’s always one step ahead. But her investigative genius may be her undoing: the deeper she digs, the harder it is to keep her own secrets buried.

Her persistence makes her the target of both the cops and a killer. Meanwhile, the terrifying truth about her past threatens to come to light, and Rachel learns the hard way that she can’t trust anyone. Surrounded by danger, she must keep her steely resolve, protect her family, and stay one step ahead, or else she may become the next victim.

This is the first book in a new series by Jason Pinter called Rachel Marin Thriller mysteries.

We spend a majority of the book wondering what really happened in Rachel’s past and why. We know she is running from something and we know it killed her husband and mentally did a number on her son who found his father’s gruesome body in a burlap bag.

The story jumps back and forth in time here and there so be aware. But that is totally easy to follow since the time jumps usually happen at a point where the story just needs a bit of explanation.

I was floored by how Sherlockian Rachel was after leaving clues for the cops about the murder of the town’s former mayor. They were set on believing it to be a suicide but she threw out so many facts that I am sure they had their mouth’s agape at her rapid fire fact dropping. Loved that part so much.

Rachel has a bit of Bruce Lee in her and she became a totally different person after the death of her husband. This whole story is just so captivating and has you glued to the page the entire time. It isn’t always about following the murder investigation but that is a big part of the story. We spend quite a lot of time just getting to know Rachel and her motivations and what her life is like now opposed to in the past. I am sure the author knowingly did this because this will be a long-running series that I am sure will be a real winner for Pinter.

I can’t wait for the next installment to come out. So excited! If you love a good mystery/thriller, you have to check this one out. You won’t be disappointed.

I received this as an ARC (Advanced Reader Copy) in return for an honest review. I thank NetGalley, the publisher and the author for allowing me to read this title.
Posted by Toni at 7:31 AM