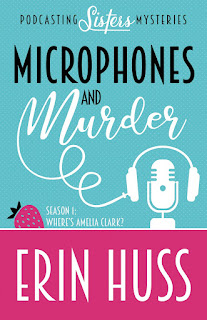 Goodreads synopsis:
Tired of living life on the sidelines, Liv Olsen gave up everything-her job at the #1 podcast series in the country, her apartment, most of her belongings-to launch her own show, Missing or Murdered. Teaming up with her kid stepsister, Camry Lewis, the dynamic duo set out to be the next big thing in true crime.

On the program for season one, the sisters' focus on the case of twenty-three-year-old Amelia Clark, who vanished ten years ago after an embarrassing video of her went viral. The police found the California native's car and personal belongings, but the investigation quickly went cold. A decade later, Liv and Camry retrace Amelia's final steps, unearthing dangerous secrets, lost loves, quirky characters, and a lifetime supply of cinnamon rolls. As funds run low and time runs out, the investigation is complicated by anonymous threats. Threats from someone who doesn't want Amelia's story told.

Liv and Camry have a lot riding on their Missing or Murdered podcast. Now it's more important than financial success. They have to know.

What happened to Amelia Clark?

This is the first book in a new series called Podcasting Sisters Mysteries by Erin Huss.

Liv has given up her spot in the staff of a popular true crime podcast in order to start one of her own. She has even chosen the focus of her first series: What happened to Amelia Clark. Her podcast is called Missing or Murdered? And she is doing it all with the help of her younger sister, Camry. Liv comes across a bunch of quirky and fun loving characters during her investigation.

I really enjoyed the part of Oliver who is a deaf YouTuber. From the looks of it, he is turning into this series book boyfriend. I love that Liv already knew sign language in order to communicate with him too.

The saddest part of this story is that the whole mystery could have been solved years earlier if certain people had gone to the police and told them what they knew. It took a podcaster with an intense interest in the subject to uncover all the lies.

Super great story. The mystery is spot on and the characters just grow on you from page one. Definitely a series I intend to follow!

I actually got approved to read this via Edelweiss but didn’t download the ARC in time. So I received this book as a gift from the author. Thank you so much, Erin Huss! You rock!
Posted by Toni at 9:45 AM