Mimi Lee Gets A Clue by Jennifer J. Chow (A Sassy Cat Mystery #1) 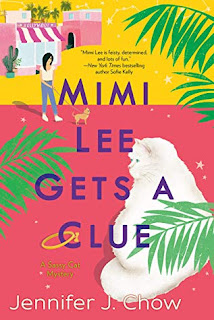 Mimi Lee Gets a Clue
(A Sassy Cat Mystery #1)
by Jennifer J. Chow

Goodreads synopsis:
Mimi Lee is in over her head. There's her new Los Angeles pet grooming shop to run, her matchmaking mother to thwart, her talking cat Marshmallow to tend to—oh, and the murder of a local breeder to solve...now if only Mimi hadn't landed herself on top of the suspect list.

Mimi Lee hoped to give Los Angeles animal lovers something to talk about with her pet grooming shop, Hollywoof. She never imagined that the first cat she said hello to would talk back or be quite so, well, catty—especially about those disastrous dates Mimi's mother keeps setting up.

When Marshmallow exposes local breeder Russ Nolan for mistreating Chihuahuas, Mimi steals some of her cat's attitude to tell Russ off. The next day the police show up at Hollywoof. Russ has been found dead, and Mimi's shouting match with him has secured her top billing as the main suspect.

Hoping to clear her name and save the pups Russ left behind, Mimi enlists help from her dreamy lawyer neighbor Josh. But even with Josh on board, it'll take Mimi and Marshmallow a lot of sleuthing and more than a little sass to get back to the pet-grooming life—and off the murder scene.

This is the first book in A Sassy Cat mystery by Jennifer J. Chow

This was a stunner of a new series by Chow. Since I am allergic to animals, reading about them is probably one of the few ways I can indulge my secret love of God's furry creatures.

I really enjoyed the gimmick of this book and thought it was done very well. Mimi Lee can hear her cat  Marshmallow through a sort of psychic connection. He became like her sidekick through all the danger and mayhem.

This book centered around animals since Mimi had a dog grooming business called Hollywoof. Her lap Marshmallow uncovered a doggie den of abused animals and before she could report him completely to the authorities, the man ends up dead. And somehow Mimi Lee ends up as suspect number one.

The author very easily introduced us to a whole slew of new characters and it all felt so natural. Usually when you try to cram so many people into a book it can feel awkward and strange. None of that here. I particularly liked the addition of newbie lawyer, Josh and Detective Brown. There are hints of a bit of a crush happening for Detective Brown where Mimi is concerned. I think in the next book Mimi may find herself with more than one suitor.

Such a fun cozy romp! Totally kept me engaged all the way through. I can't wait for the next book in the series to come out. Really loving all these new to me authors bringing us such awesome new series!

If you love a good cozy mystery, definitely check this one out. You won't be disappointed.

I received this as an ARC (Advanced Reader Copy) in return for an honest review. I want to thank NetGalley, the author and the publisher for allowing me to read this title.