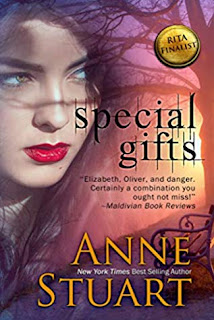 The man who’d broken into Elizabeth Hardy’s Colorado house was no lost ski bum. Her inexplicable and intuitive powers, those unwanted gifts, were always vague, but she knew that much. Sam Oliver was tall, dark, and deadly—a liar and a trickster, and she’d finally found a man she couldn’t ignore.

She didn’t look like a fraud and a liar, and after years in Army Intelligence Col. Sam Oliver should know. Instead Elizabeth Hardy was a pale, vulnerable-looking waif, though he didn’t buy her innocent act. He’d always made it a rule to keep his hands off his targets. Some rules were made to be broken.

With a young housewife missing and presumed dead, there were no simple answers to any number of questions. Why did the missing woman look exactly like the also-missing daughter of the secretary of state? Why did Elizabeth want to trust him, why did Sam suddenly want to believe in psychics? For God’s sake, why couldn’t they resist each other?

And the biggest question of all: would they survive to find out what was going on between them? Or was all hell about to break loose?

This book was first published under the Silhouette line back in 1990. I am assuming it is being re-released with a new cover.

This story certainly didn’t get rusty with age.

Elizabeth Hardy works with a local investigator to uncover insights into unsolved cases. She has a sort of psychic gift that assists her. Intuitive flashes and key details come forth to her but not without a price. Her health suffers after every psychic encounter.

Sam Oliver comes in after one of Elizabeth’s intuitive insights brings forth the code name of a government’s covert group which has now been taken over by terrorists. Elizabeth’s missing person case and the one Sam is working on overlap. Apparently, the missing girl looks very similar to the President’s daughter and she is also on the missing list.

Sam was not a likable guy most of the time during this story. I am not certain had I been in Elizabeth’s shoes, I would have chosen the same path she did.

This is a bit of a hate to love story with a happy ending which I always like. Good stuff.

If you love a good romantic suspense mystery, you have to check this one out. You won’t be disappointed.

I received this as an ARC (Advanced Reader Copy) in return for an honest review. I thank NetGalley, the publisher and the author for allowing me to read this title.
Posted by Toni at 12:46 PM