In Her Shadow by Kristin Miller 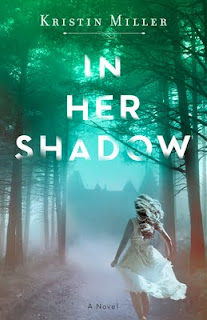 In Her Shadow
by Kristin Miller

Goodreads synopsis:
A pregnant young woman becomes obsessed with the disappearance of her lover's wife--only to discover that she may be headed for the same fate--from New York Times bestselling author Kristin Miller.

Once his secretary, Colleen is now pregnant with Michael's baby. When he brings her to his opulent estate, Ravenwood, she is abruptly thrust into a life of luxury she's never known. But Colleen finds the immense house suffused with the memory of Michael's beautiful wife, Joanna, who left months ago and who haunts her imagination. It quickly becomes apparent that there is little room for a new mistress of this house: The staff greets her with hostility, and there are entire wings and corridors from which she is prohibited to enter.

Then bones are unearthed in the grove across the street.

When Michael falls under the suspicion of the detectives investigating the case, the soon-to-be mother of his child finds herself hurled deeper into her boyfriend's dark past--a past that threatens to upend all her dreams. But the terrifying secrets lurking in the shadows of Ravenwood pale in comparison to the drastic measures Colleen will take to stake a claim to her new life.

Inspired by Daphne du Maurier's Rebecca, In Her Shadow is the chilling story of one woman's desperate desire to be loved and the ghosts that get in her way--but only if she lets them.

This book is a standalone story by Kristin Miller.

Basic premise: Young woman is pregnant with her boss’s baby and his wife, who was originally missing is discovered dead not far from their house.

This is one of those books where you really need to pay attention to the clues in order to not be completely surprised when the killer is revealed. And the killer is indeed quite a surprising one.

Colleen is constantly reminded of Michael’s dead wife whom he has kept her room completely in tact just as it was when she disappeared and their baby’s nursery is being kept a secret from Colleen as well. Lots of secrets in this one. Everyone has a motive to have killed Michael’s wife, Joanna. So this mystery is really engaging and makes you want to keep reading on.

I don’t want to say too much about the actual plot since all the clues are so important and I might unknowingly reveal the killer’s identity. But be aware that the point of view, the “I” character, changes quite frequently in this book and it can become a bit confusing at times when the changeover happens.

Overall it was a really good read, I was engaged and it was quite a doozy of a revelation when the killer is finally unearthed.

If you enjoy a good mystery/thriller, definitely give this one a try, you won’t be disappointed!

I received this as an ARC (Advanced Reader Copy) in return for an honest review. I thank NetGalley, the publisher and the author for allowing me to read this title.
Posted by Toni at 8:23 AM