Seas the Day (A Seafood Caper Mystery #1) by Maggie Toussaint 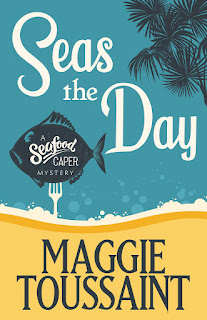 Seas the Day
(A Seafood Caper Mystery #1)
by Maggie Toussaint

Goodreads synopsis:
Caterer River Holloway has talents beyond her to-die-for cooking. She is also known among friends and family on Shell Island as a “finder” of things. Which is why a desperate mother begs River to track down her grown son, Chili Bolz, who’s seemingly vanished.

Deputy Lance Hamlyn, a newcomer to Shell Island, has hit a dead-end in trying to locate the missing man. Familiar with River’s reputation, he attempts to team up with her, hoping that her inside track with the locals might aid his investigation. But the simple missing person case begins to boil over into something far more frightening when Chili’s mother falls victim to a brutal assault. Worse, her dying words to River seem to incriminate more than one of River’s friends in both kidnapping and, now, murder.

While Deputy Hamlyn conducts the formal criminal investigation, River uses her time between catering events to do some sleuthing of her own. Her efforts are hampered by the unexpected return of her absentee boyfriend, who has his own reasons for wanting her to stay safely in the kitchen. With the number of suspects growing longer than her food shopping list, River soon finds herself caught in an unsavory recipe for disaster. She must locate the missing Chili and discover who killed his mother before her own goose is quite literally cooked!

This is the first book in the Seafood Caper Mystery series by Maggie Toussaint.

Basic premise: A desperate mother asks River to track down her son, Chili. But there is so much more going on here than just a missing person’s case.

The farther we see River go into this investigation, the more crazy it becomes. River’s boyfriend, Pete is stuck in California and can’t lend a lot of support. And she has Lance “Deputy Dog” Hamlyn wanting to draw her into his investigation at one point and pushing then her away at the same time. He seems like he has a romantic interest in River but we learn what is really going on the farther we get into the book.

I know this is book one but as I was reading this, I felt like there was this unsaid backstory between Deputy Lance and River. I can totally see a prequel to this book being a real possibility. I feel like there is a lot of trust between River and Lance and I want to know where that trust came from.

Great story. I think this will be an awesome series and I really look forward to it! This mystery whodunit is so spot on that you will be left wanting more and more! I hope book two comes out soon!

If you enjoy a good cozy mystery, definitely give this one a try, you won’t be disappointed!

I received this as an ARC (Advanced Reader Copy) in return for an honest review. I thank Edelweiss, Henery Press and the author for allowing me to read this title.
Posted by Toni at 1:47 PM