Somebody in the Neighborhood by Judy Moore 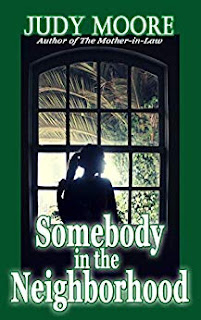 Somebody in the Neighborhood
by Judy Moore

Goodreads synopsis:
Dawn Andersen and her parents are horrified when her carefree Aunt Amy is found stabbed to death on the beach, the second woman to be murdered in the small oceanside town of Manatee Beach. The police have arrested a homeless man for the murders, but is he the real killer? Dawn, 25, makes the biggest decision of her life when she decides to leave her routine existence in Ohio to move into her aunt’s cottage a block from the ocean in South Florida.From the first night that Dawn arrives in Florida, the feeling of uneasiness never leaves her. There’s the strange man next door who always seems to be watching her. Married neighbors who were infatuated with her beautiful aunt. The nosy, too friendly mailman. A hooded figure who’s been lurking outside her house at night. As Dawn learns more about her aunt’s life in Florida, she becomes convinced that the murderer is closer than she ever imagined, that her aunt’s killer is actually somebody in the neighborhood.

I thought this book was really good. I felt like it was the start of a mystery series and Moore did say that a few of these characters and the setting will pop up in their own cozy mystery series coming soon. Yay!

Basic premise: Dawn and her parents com e to Manatee Beach to clean out her Aunt Amy’s apartment since she was stabbed to death on the beach. Dawn wants her independence from her parents and decides to stay in Aunt Amy’s house and live in Florida. It is quite a change from Ohio and she finds trouble almost from the  very beginning.

I thought this was an interesting take on what I assume is a cozy mystery. It waffles between a police procedural and a cozy. It focuses on Dawn’s coming of age, so to speak and how she deals with all her neighbors.

I thought I had this all figured out and since writers like to challenge my thinking on a whodunit, of course, I was wrong! But I was close in my estimation. There was another fact floating around in the storyline that I did grasp onto immediately so I feel a bit more vindicated that the author didn’t totally snow me.

Looking forward to seeing these characters in cozy form. I wish more than a couple would turn up in the new upcoming series. I will just have to see what unfolds in the future.

If you love a good cozy mystery/police procedural, definitely try this one on for size. You won’t be disappointed.

I received this book from the author for an honest review.
Posted by Toni at 8:22 AM