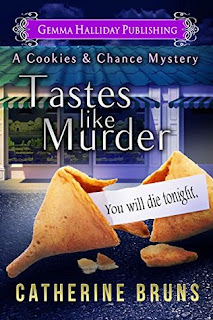 Goodreads synopsis:
Sally Muccio’s had her crosses to bear: a cheating ex-boyfriend, crazy Italian parents, and an unfaithful husband, just to name a few. After her divorce, she returns to her hometown to start a novelty cookie shop whose specialties include original fortune cookies, served with a sprinkle of foreshadowing. But there’s no warning when her ex-husband’s mistress drops dead on Sal's porch, and police confirm it’s a homicide. Determined to stop her life from becoming a recipe for disaster, Sal takes matters into her own hands. With two very different men vying for her affection, dead bodies piling up, and a reputation hanging by an apron string, Sal finds herself in a race against time to save both her business and life—before the last cookie crumbles.

This is the first book in the Cookies and Chance mystery series by Catherine Bruns.

Basic premise: Sally has opened a new bakery with her friend, Josie. She is recently divorced and wants to start anew. Then the woman who broke up her marriage shows up in the shop wanting to torment her. As if causing her to break up her marriage wasn’t enough of a slight. Then Amanda, ends up dead on her doorstep causing Sal to become suspect number one. In the meantime, a new detective has joined the force and has an eye for Sal. Not to mention, her old high school sweetheart who broke her heart is back in town.

This book was a great beginning to a series. There was nothing contrived about it either. It was just a fun and wonderful romp into this great cozy world.

I did what I normally tend to do and read book two first.  Don’t ask me why. I’m just crazy that way. Then when I was blown away by book two, I knew I had to go back read book one. So I went backward to fill in the backstory. And I am so glad I did. Boy, it seems Sal just can’t win with all these crazy people in her life.

Sal’s parents are quite a hoot as is an elderly friend of her grandmother who shows up every day to taunt her and wanting a free fortune cookie that Sal offers at her store as a gift to customers. I wouldn’t mind seeing more of these cookie notes show up to lead Sal onto the right path. Her Dad already seems to believe in their power of prophecy.

The storyline of the love triangle was nice although, I would like to see it extended somewhat. I kinda like the dynamic where two guys want her affection. The ending is a big of a cliffhanger and you don’t know which guy she chose in the end. Nice touch.

I am now officially addicted to this series. Already on book three!

If you love a good cozy mystery, definitely check this one out . You won’t be disappointed.
Posted by Toni at 9:50 AM