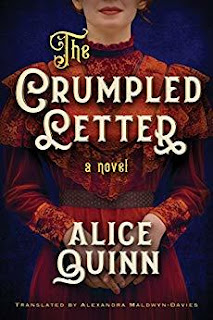 Goodreads synopsis:
On the French Riviera during the Belle Epoque, a murder draws two women into the dangerous shadows of Europe’s privileged elite…

One spring evening in 1884, beautiful young courtesan Lola Deslys discovers the lifeless body of a chambermaid hidden in the gardens of the Hôtel Beau Rivage in Cannes. Even more distressing is that Lola knows the girl well. When the inquiry into her murder fails to reveal a single substantial clue, Lola is persuaded by novelist Guy de Maupassant to delve into the case on her own.

Eager to exert her independence and defy conventions, Lola agrees. But she needs help in her investigation, and there’s no better partner in her pursuit—however unlikely—than Miss Gabriella Fletcher, a highborn, well-educated, and currently disgraced English governess.
To solve this dreadful crime, Lola and Miss Fletcher must navigate the depths of respectable society. But will their determination suffice in a city where fortune, secrets, men, and appearances reign supreme?

This is the first book in the Belle Epoque Mystery series by Alice Quinn.

This excellent historical cozy mystery is set in Cannes, France. It is a new location for me and I found it quite an interesting read because of that addition alone. The book is pretty thrilling and would have been highly brazen back in the day. Our main POV character is that of an English governess named Gabriella Fletcher who has been disgraced and fallen from her high position in society. To survive she has become almost like a handmaiden to a flashy young courtesan named Lola Deslys. In other words, Lola is the Cannes equivalent of a lady of the night.

Fletcher is pretty brazen in her own right. She smokes cigars and fills in as Lola’s driver which was unheard of at the time. Also, she has been previously jilted by a high society woman named Lady Sarah who had been her lover and cast her out into society when she tired of Fletcher. Lady Sarah appears here and there in this book showing up at all the most inopportune times looking like she is jealous of Fletcher and what she thinks is her new relationship with Lola.

Lola and Fletcher stumble across the dead body of one of Lola’s friends who is now a chambermaid at a local hotel. A novelist they meet named Guy de Maupassant persuades Lola to look into her friend’s death. But it is really Gabriella Fletcher who figures everything out.

During the investigation, Lola gets left by her main patron and has to come up with a lot of money to keep herself in the leisure life she is so used to. She threatens to leave Fletcher and her other staff out in the cold.

There have been quite a lot of great historical cozy mysteries coming out lately and this is for sure one of them. The second book in this series, The Shattered Portrait, just came out at the end of February. Definitely check them both out if you love this type of book. Highly recommend.
Posted by Toni at 12:54 PM