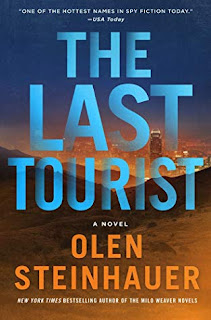 A decade later, Milo is hiding out in Western Sahara when a young CIA analyst arrives to question him about a series of suspicious deaths and terrorist chatter linked to him.

Their conversation is soon interrupted by a new breed of Tourists intent on killing them both, forcing them to run.

As he tells his story, Milo is joined by colleagues and enemies from his long history in the world of intelligence, and the young analyst wonders what to believe. He wonders, too, if he’ll survive this interview.

After three standalone novels, Olen Steinhauer returns to the series that made him a bestseller

This is the fourth book in the Milo Weaver series by Olen Steinhauer.

Great novel but I was confused. I really do like a good spy novel but I was a bit perplexed by this one. In some ways it was easy to follow and in other ways I was totally baffled. And that is the way it should be in spy books, right?

This says it is a Milo Weaver book but it really didn’t feel like it to me. Milo wasn’t actually what I would consider the main POV. It was shared with two other characters who in reality seemed to just shine off the page more than Weaver did. I have not read any of the other books in the Milo Weaver series so I may be behind the eight ball here. The resurrection of “The Library” and the “Tourists” from the Department of Tourism that spy for it was particularly interesting to me. Not sure if this was a part of the previous three novels.

If you love a good action adventure story with tons of drama and a killing or two, then this is for you. I don’t think I was in the right mind-space for it right now.  All the technical stuff just went over my head and I kept confusing who was speaking as the “I” character from time to time. The POV jumped around a lot. Too much for my brain, apparently. Don’t let that dissuade you from reading this novel. It is very good. Reccommended.