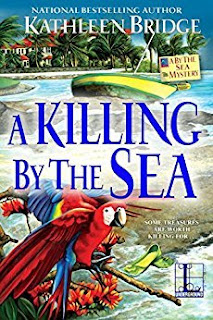 Trading the urban sprawl of Manhattan for the tranquility and exotic beauty of a Florida barrier island was the best decision author Liz Holt ever made. What could be more ideal for relaxing, regrouping, and getting a writer’s creative juices flowing than observing life at the unconventional hotel that has been in Liz’s family for generations? But it’s death that grips the island when a body sweeps in on the tide . . .

The victim was a member of a fishing crew lost at sea who may or may not have drowned. Despite the corpse in their crosshairs, the staff of the Indialantic by the Sea Hotel and Emporium continues its plans for its first annual Pirates’ Weekend. But things go further awry when both a hurricane and a killer leave a trail of destruction. Liz and her new boyfriend must figure out who’s behind the carnage before they also end up in Davy Jones’ locker . . .

Basic premise: Liz finds a dead body on the beach with an antique gold coin underneath the corpse. She decides to get involved in the investigation but is asked over and over to stay out of it.

Loved the quirky Aunt Amelia. She was quite a hoot. Although, her constant litany of her acting credits do get a bit tiresome after awhile. There is a big pirate theme in this story and that makes this even more interesting to the reader.  BUT … Somehow I thought the pirate thing verses the acting stories made the whole plottline hard to follow and disrupted the mystery aspect of it all.

I thought the mystery was pretty good. Hard to follow at times and the flow of the text did feel a bit choppy but the characterization was better. The middle of the story felt muddled when the focus changed to Aunt Amelia instead of the mystery. But I caught back up with it in the last third of the book.

As far as the love connection goes… I am not totally buying this relationship between Liz and Ryan. It just feels off to me. Sometimes it is hard to tell ages when you read a book so it is hard to guess whom I would like better to fill that part. Not to mention the comparisons between citizens and actors is really difficult. I am not sure many of the fans of the cozy genre would even know who many of these actors were.

Overall, it was a pretty good read and I look forward to reading more in the series!